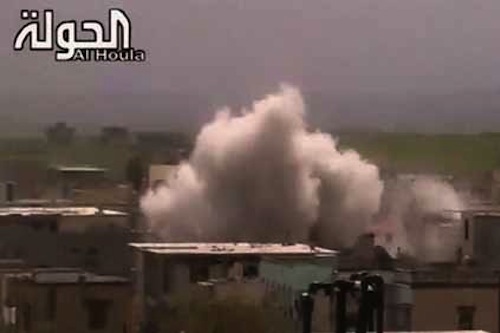 Secretary-General Ban Ki-moon expressed his shock at reports of alleged use of chemical weapons in Syria’s Damascus suburbs, as a United Nations team continues to investigate the matter in other parts of the war-torn country.

Following a late-day closed-door briefing to the Security Council on the latest developments, Deputy Secretary-General Jan Eliasson reiterated Ban’s deep shock at reports of chemical weapons use in Syria.

“We see the need to investigate this as soon as possible; no matter what the conclusions, this represents a serious escalation with grave humanitarian and human consequences,” Eliasson told reporters outside the Council chamber.

He added that the UN investigation team is “in place” and that he and Ban hope the Syrian Government will give its consent so that the probe can be carried out.

“This should also be seen in the larger and broader perspective, namely the great need for cessation of hostilities,” he said of the dramatic situation, underscoring that: “What this incident has shown is that we must contain this conflict,” especially given its regional implications, and now, the possibility of the use of chemical weapons, which is to be investigated.

Stressing that there has been no confirmation of chemical weapons use, the Deputy-Secretary-General said senior UN officials are in contact with the Syrian Government.

Also at the microphone, Ambassador Maria Cristina Perceval of Argentina, President of the Security Council during the month of August, said there is “strong concern among the Council members” about the allegations, and a general sense that there must be clarity on what happened and that the situation has to be followed carefully.

The team “is following the current situation in Syria carefully, and remains fully engaged in the investigation process that is mandated by the Secretary General,” Ban’s spokesperson told journalists in New York.

According to the agreement reached in Damascus in July, the two parties are discussing, in parallel, other allegations and their related sites.

“Professor [Åke] Sellström is in discussions with the Syrian Government on all issues pertaining to the alleged use of chemical weapons, including this most recent reported incident,” the spokesperson noted.

He added that Ban is aware that a number of Member States, the Arab League and the European Union have expressed grave concern about the most recent reports of the possible use of chemical weapons.

Ban and the Security Council reiterated that the use of chemical weapons by any side under any circumstances would violate international law, and reaffirmed the need for a “thorough investigation” of the alleged incidents, according to the spokesperson, as well as a need to cease hostilities.

Also today, the UN Children’s Fund (UNICEF) said the reported attacks on civilians, which “presumably” included children on the outskirts of Damascus are “deeply disturbing.”

“Such horrific acts should be a reminder to all the parties and all who have influence on them that this terrible conflict has gone on far too long and children have suffered more than enough,” the UN agency said in a statement.

Meanwhile, in Cairo, Under-Secretary-General for Political Affairs Jeffrey Feltman met with Arab League Secretary-General Nabil Elaraby today to discuss a range of issues, including efforts towards a political solution to the conflict in Syria.

The Joint Special Representative for Syria, Lakhdar Brahimi, who reports to both organizations, has been supporting efforts on a political solution including a second international conference on Syria to be held in Geneva.