Interview with Danny Abdul Dayem: “There will be no ceasefire” 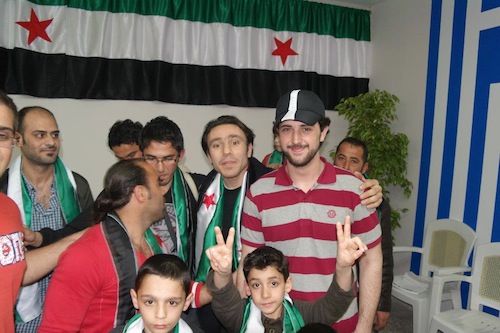 As the Syrian government continues to ban many forms of social media and foreign reporters from entering the country, the people of Syria still find ways to get their stories out. Earlier this year, Danny abdul Dayem who risked his life bringing the news of the revolution and violent crackdown in Syria to worldwide audiences was shot and fled Homs to the UK. Since then Danny abdul Dayem has played a pivotal role in spreading awareness about the situation in Syria and the atrocities committed by the Syrian regime especially in Homs.

During the shelling of Baba Amr, in Homs, Danny abdul Dayem continued to upload videos of Homs on the ground of infrastructural damage and casualties, becoming the face and mouth of Homs.

On Moday, April 2, the 23-year-old British Syrian activist and citizen journalist, arrived in Athens, Greece for a 5-day stay, meeting with the Syrian community here. During his stay, he gave an exclusive interview to Julie Jalloul, Managing Editor of AlYunaniya:

Q: Danny, how did you get involved in the revolution?

A: Well, the first month I joined the demonstrations. After that, my main job was to get medication and food to places in need. During the shelling on Baba Amr, in Homs there was no electricity, food, water. People were getting shot and we were running out of anti-tetanus injections to give to people. You know the injections, when you get shot so you don’t get infected. I used to smuggle blood bags from Lebanon, which were illegal and if you get caught with them you could go to prison. I had approximately 400 blood bags hidden in my house.

After a short period of time, I got shot and fled Homs with my family on August 30th to London. I stayed there for two months then went back to Cairo. I worked in an operations room in cairo, aiding people along with other people supporting the revolution. But my heart was back in Homs. I had to be there and help. So I went back and tried to join the Free army but they didn’t accept me, as I had no arm expertise or training whatsoever. They told me I’ve got a good accent in English, so they said I should do the news… I didn’t want to do the journalist stuff… That’s when I started uploading videos on Homs on the ground. I stayed in Baba Amr during the worst 5 or 6 weeks when the shelling was going on and then I smuggled out. I got hurt on my leg a bit, but that’s not why I left Baba Amr. I left to get more aid. This is when I started touring the world… spreading the word.

Q: Could you describe the everyday situation of Homs during the conflict?

A: A month before the shelling of Homs city, we were preparing ourselves by storing food. Shelling started on Baba Amr in February and it lasted 27 days. We were hit by 500 rockets on a daily basis. Stored food was all gone just a few weeks later. We had to cross the street running not to get shot from a sniper which wouldn’t discriminate between a child, woman or man. We couldn’t get to the hospitals. Assad’s forces would execute everyone taken there for treatment. There are no hospitals in Baba Amr anymore; only field hospitals left. There were four doctors in Baba Amr, one of which was a dentist and one wasn’t even a real doctor; he was the one doing all the caesarians in the district. Assad’s forces have raped more than 400 girls in Homs.

We lost count of victims; body pieces were found everywhere. We got used to seeing death. We get used to the smell. We used to make jokes. We didn’t care anymore, we were free. We could call Assad ‘a giraffe’  without caring anymore.

Q: Where do you think this conflict is going to? What could be the solution?

A: We need military intervention… any kind of military intention, by the UN, by the US, anything to save our lifes. Even if its on the ground. Anyhting is better than Assad. We don’t care anymore..it’s a matter of survival. If you ask any person in Homs they will tell you the same. If anybody outside tells you ‘no no we don’t want war’ , this is rubbish. We already have a war. But we know no help will come…

So, the only way is to arm the free army, to support the Free Syrian Army. If it wasn’t the Free Army they would have slaughtered all civilians. They are the ones that protect the civilians on the ground. In a disctrict called Karm Al Zaitoun they literally slaughtered everyone because there was no Free Army there.

The Free Army comprises of 50,000 – 60,000 people. Around 15,000  are in Homs. And no, it is not dangerous to arm them, as they say, since they are simple people, like everyone else, trying to defend their families from a brutal regime.

Q: One of the main concerns in everyday headlines is what happens next. Is there a fear of a sectarian warfare?

A: No, No! We never had any sectarian problem. If you look at Syria’s history nobody ever used to claim they are Christians, Alawites, Kurdis or Sunnis. It is the regime that has created this division. In fact, we have Alawites standing against the regime, like Fadwa Suleiman, a famous actress and many others. They are few, but considering they make up only 7% of the Syrian population, it is a good number.

We have no sectarian problem. We want Assad to leave.

Q: What about the Annan plan for a ceasefire on April 12?

A: Oh this is rubbish… They are just helping Assad buy more time. They are giving more time to the Syrian forces to execute their shoot-to-kill orders. There will be no ceasefire.

Q: How close do you think victory is for the opposition?

A: Let’s be realistic, it will take a while. Nobody knows. But we’re never going to stop. We deserve the freedom everybody lives in.

Q: How can the people in Greece or all over the world help Syria?

They should recall their ambassadors! Help with medical supplies and food aid. Help raise awareness. We need help!

This interview was taken one night before Danny leaves Athens, Greece on Friday April 5. Danny said he was definitely returning to Homs at some point without revealing exact dates. Since then, 3 days have passed. Danny might be in Homs or soon going to be there. No one knows.