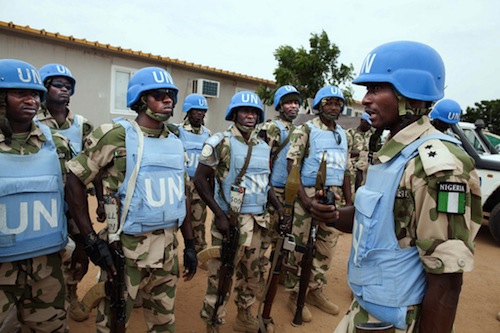 The head of the African Union-United Nations Mission in Darfur (UNAMID) today urged the Government to ensure humanitarian access to two villages in East Darfur State, where thousands of civilians require assistance.

During his meeting with the Minister of the Interior on Wednesday in Khartoum, the Joint Special Representative of UNAMID, Mohamed Ibn Chambas, also called on the Government to prevent civilian loss of life and property as it reestablishes its control over these areas.

According to UNAMID, an estimated 18,000 displaced persons remain concentrated around the Mission’s team sites near the Muhajeria and Labado villages since 6 April, when fighting broke out between the Government forces and the Sudan Liberation Movement/Minni Minawi.

The fighting has killed at least four civilians and wounded six others. The displaced populations are still waiting for much-needed humanitarian aid, UNAMID said in a statement.

Chambas also thanked the Ministry of the Interior for the good working relationship that exists between his department and UNAMID. In particular, he noted the fruitful cooperation between the UNAMID Police component and the Darfurian police.

On Monday, Chambas as well as the UN Resident and Humanitarian Coordinator in the Sudan, Ali Al-Za’tari had expressed “serious concern” about the safety and well-being of civilians caught up in fighting, and had called for immediate access to allow humanitarian teams to assess the condition of all affected civilians and in particular women, children and elderly people.