Posted on: June 24th, 2012 by AlYunaniya Staff No Comments 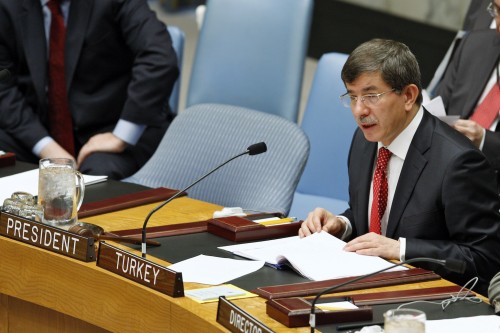 The Turkish military jet downed by Syria’s military Saturday was shot down in international airspace after it mistakenly entered Syria, Turkey’s foreign minister has said.

Davutoglu said onn state-run TRT TV the plane entered Syrian airspace on June 22, but quickly left when warned by Turkey noting that the fighter jet ”was hit when it was a distance of 13 miles from the Syrian coast”.

He added that the jet was on a training mission, and “not involved in any operation against Syria”. It was testing Turkey’s own radar and defence systems, he said, according to AP.

“The plane was not hiding its identity and could be seen by all,” Davutoglu said.

Syria said late on Saturday that they realized the plane belonged to Turkey after it was downed and that the aircraft had violated its airspace.

In a phone call with his Turkish counterpart Ahmet Davutoglu on Saturday, Ali Akbar Salehi, Iran’s foreign minister,  hoped that the issue would be solved in light of prudence and dialogue. He hoped that peace and stability would be maintained in the region in light of peaceful settlement of the issue, according to a statement on the Iranian foreign ministry website.

Earlier on Saturday, the Turkish president, Abdullah Gul, said it is not possible to ignore the fact that Syria shot down one of its fighter jets.

“When you take in to account the speeds at which jet planes travel over the sea, it is routine for planes to go in and out of borders,” he was quoted as saying by Anatolia.

Gul confirmed yesterday that it had been in contact with Damascus and a search operation for the jet and missing pilots was under way.

Ankara has previously hinted the possibility of setting up some kind of humanitarian corridor inside Syria, which would require military intervention, but has said it would take no such action without UN Security Council approval.