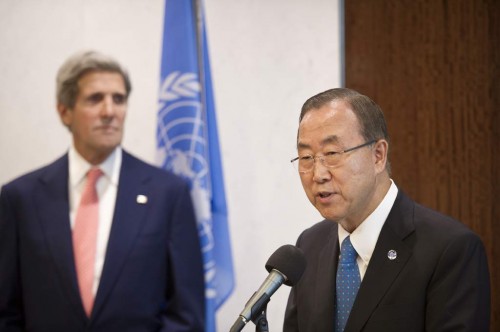 Secretary-General Ban Ki-moon and United States Secretary of State John Kerry, speaking to the press at United Nations Headquarters in New York, stressed that a political solution is the only way to end the Syrian conflict, adding that the death toll in Syria has risen to more than 100,000.

“More than 100,000 people have been killed, and millions of people have either been displaced or become refugees in neighbouring countries. We have to bring this to an end,” Mr. Ban told reporters ahead of closed-door talks between the two officials and a ministerial-level Security Council meeting on Africa’s Great Lakes region, which Mr. Kerry will chair.

“Military and violent actions must be stopped by all the parties and it is thus imperative to have a peace conference in Geneva as soon as possible, as initiated by Mr. Kerry and Mr. Lavrov,” the Secretary-General underscored, adding that he and Joint Special Representative Lakhdar Brahimi would spare no effort to convene this meeting as soon as possible.

In May, following talks in Moscow between Russian Foreign Minister Sergey Lavrov and Mr. Kerry, the two countries announced they would work together to achieve a political solution to the Syria crisis, and agreed to convene an international conference aimed at achieving this goal

“There is no military solution to Syria, there is only a political solution and that will require leadership to bring people to the negotiating table,” Mr. Kerry said, adding that he and Mr. Lavrov remain committed to make the Geneva meeting happen.