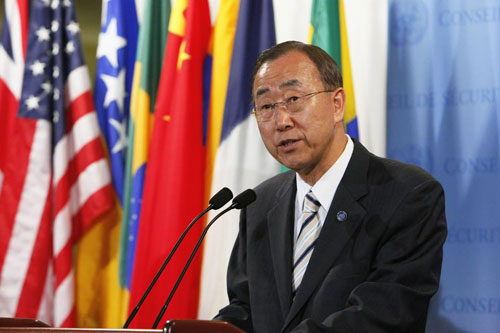 Appealing once again to the people of Egypt to exercise restraint and pursue inclusive dialogue, United Nations Secretary-General Ban Ki-moon expressed serious concern about “military interference” in the political crisis gripping the country.

The Secretary-General raised these and other concerns in a phone conversation with Egyptian Foreign Minister, Mohammed Kamal Ali Amr, according to a statement issued by a UN spokesperson in New York.

Noting that he has been monitoring closely developments in Egypt, Mr. Ban expressed “deep concern” about military intervention into civilian and constitutional affairs. “He reminded the Foreign Minister of the need for the Egyptian authorities to protect the fundamental human rights of all Egyptians, including freedom of speech and assembly.”

The readout of the phone conversation notes that the UN chief had also called for an end to all violence, especially sexual violence against women.

Noting that he has long supported the aspirations of the Egyptian people, the Secretary-General called for a peaceful dialogue that includes all parts of Egypt’s political spectrum to find a way forward.

“He stressed the need for a quick return to civilian rule in Egypt based on a clear roadmap for elections,” the readout says, adding that Mr. Ban underscored the UN’s support for an Egyptian government fully accountable to the Egyptian people and supportive of Egyptian aspirations.

The Secretary-General has been traveling through Europe this week and is in Copenhagen, Denmark to participate in the opening of UN City, “a cutting-edge, environmentally friendly hub” for eight of the Organization’s agency’s working in the country.

At the opening ceremony earlier today, Mr. Ban thanked the people and Government of Denmark for their contribution and long-standing support, hailing the new complex as an important contribution to a more efficient, carbon neutral UN.

“From the rows of parked bicycles to the wind turbines out to sea, I see proof that we can tackle the climate challenges that face us,” he said, adding further: “From solar panels to seawater cooling and external metal blinds to regulate light and heat, UN City shows what can be achieved.”

Following that event, during a joint press conference in the Danish capital with Prime Minister Helle Thorning-Schmidt, Ban recalled the statement issued by his spokesman in New York on the current situation in Egypt, where massive nationwide protests against the Government of Mohamed Morsy have sparked a political crisis.

According to media reports, the Egyptian military, which had earlier in the week given the opposing parties 48 hours to resolve their differences, has since deposed Morsi, suspended the Constitution and paved they way for an interim Government.

The UN chief said that in their protests, many Egyptians voiced deep frustrations and legitimate concerns, and stressed that an inclusive approach is essential to addressing the needs and concerns of all Egyptians.

“I think one key to a successful resolution of this crisis is inclusivity and any discussions, dialogue or governing bodies should include representatives from the wide spectrum of Egyptian politics, Mr. Ban said.

The UN chief said that during their talks on a range of issues, he and Prime Minister Thorning-Schmidt both expressed deep concern about the “raging war” in Syria.

“There can be no military solution to this tragic conflict,” he said, adding that the UN continues to press for a political solution while providing life-saving humanitarian relief to millions of Syrians.

At the same time, the international community must maintain a strong focus on resolving the Israeli-Palestinian conflict. “The UN will do all it can to support peace and the realization of the two state solution. Only a comprehensive peace will provide lasting security to all people in the region,” the Secretary-General said.

He and the Prime Minister also exchanged views on Afghanistan, where the people are in the midst of a political, economic and security transition. “This is a huge challenge for any country,” Mr. Ban said, stressing that those transitions must be approached holistically and based on predictable support.

“I am grateful for Denmark’s ongoing contribution to Afghanistan on both security and civilian development,” he said.

Regarding development matters, the Secretary-General said the two leaders had also focused on how to continue working closely together to promote sustainable development, including sustainable energy and a green growth economy and global education.

“And I very much appreciate the leadership and participation of Prime Minister Thorning-Schmidt, as one of the very few world champions for education and I count on her leadership on this.”

He looked forward to Denmark’s continued engagement as the international community works to define an ambitious post-2015 development agenda. In addition, he commended Ms. Thorning-Schmidt for her strong support and leadership in all matters, including Global Education First Initiative and energy initiative and climate change financing and all these matters.

Finally, he congratulated Denmark for its formidable leadership in gender equality and women’s empowerment.

“All of my activities here have reconfirmed my conviction that the United Nations has a trusted partner and a great champion in Denmark,” the Secretary-General concluded.