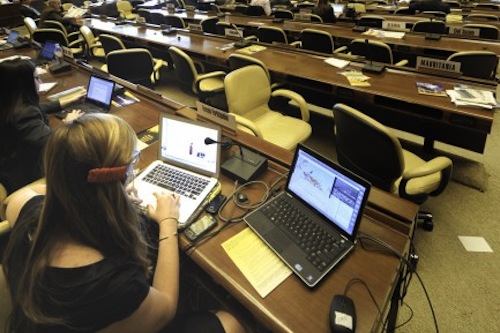 The international ‘digital divide’ is closing as a steady fall in worldwide costs of telephone and broadband Internet services has enabled a number of developing countries to expand their access to information and communication technology (ICT), the United Nations telecoms agency says in a report released today.

Measuring the Information Society 2012, produced by the UN International Telecommunication Union (ITU), says that developing countries now account for the “lion’s share” of market growth in the mobile sector, according to an ITU press release detailing the report.

The report also shows that the ICT sector has not only become a major contributor to economic growth, but is especially so in developing countries, where global exports of ICT goods accounted for 20 per cent of their merchandise trade in 2010, compared to 12 per cent world wide.

“While prices in developed economies have stabilized, those in developing countries continue to fall at double-digit rates,” ITU stated in a news release on the report.

But, ITU said, the digital divide – generally defined as the difference in levels of ICT access between developed and developing countries – remains significant.

Developed countries register average “connectivity” values that are twice that of their developing counterparts on the Geneva-based agency’s ICT Development Index (IDI), according to the ITU report, which adds that policy makers should pay “keen attention” to the plight of a group of so-called ‘Least Connected Countries’ that the index identifies as having the lowest connectivity rates.

“The past year has seen continued and almost universal growth in ICT uptake,” said Brahima Sanou, the Director of ITU’s Telecommunication Development Bureau, which authors the annual report. “The surge in numbers of mobile-broadband subscriptions in developing countries has brought the Internet to a multitude of new users.”

She added, “Despite the downward trend, prices remain relatively high in many low-income countries. For mobile broadband to replicate the mobile-cellular miracle and bring more people from developing countries online, 3G network coverage has to be extended and prices have to go down even further.”

Commenting on the report, ITU’s Secretary-General, Hamadoun I. Touré, called it the “annual industry benchmark for technology development.” He said the agency’s reputation as a “wholly impartial and reliable source” renders it the “most comprehensive statistical and analytical report on the shape of ICT markets worldwide.”

The report shows that the Republic of Korea remained the world’s most advanced ICT economy as determined by the IDI, which ranks 155 countries according to their levels of ICT access, use and skills, and takes account of 2011 and 2010 scores.

The next four countries – Sweden, Denmark, Iceland and Finland – were also unchanged from the year before, while the United Kingdom, which moved from 14th place in 2011 to ninth in 2012, was the only new arrival in the top ten.

European countries also filled eight of the top ten spots, with Japan, ranking eighth, as the only non-European country at that level besides top-placed Republic of Korea. All the top 30 were high-income countries, which, ITU said, underlined the “strong link between income and ICT progress.”

ITU noted the report’s findings also include that countries marking the most progress in terms of ICT development were mostly in the developing world. It cites “strong performers” as including Bahrain, Brazil, Ghana, Kenya, Rwanda and Saudi Arabia.

“Mobile-cellular subscriptions registered continuous double-digit growth in developing country markets, for a global total of six billion mobile subscriptions by end 2011,” ITU said, noting that China and India each account for around one billion subscriptions.

The increase in developing world connectivity rates has taken place alongside a rise in the affordability of telecommunication and Internet services.

“The price of ICT services dropped by 30 per cent globally between 2008 and 2011, with the biggest decrease in fixed-broadband Internet services, where average prices have come down by 75 per cent,” ITU said.

Still, ITU highlighted that fixed-broadband services remained “too expensive” in most developing countries, explaining that the price of a basic, monthly fixed-broadband package represented more than 40 per cent of monthly gross national income per capita at the end of 2011, compared to 1.7 per cent in developed economies.