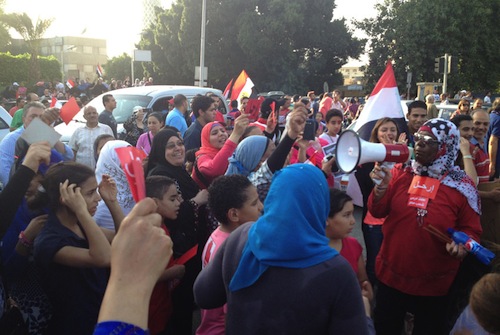 Secretary-General Ban Ki-moon has voiced deep concern at the continuing political stalemate in Egypt, and called on all sides to avoid provocations and to consider new approaches to ensure an inclusive political process rooted in reconciliation.

“The Secretary-General repeats his commitment to support non-violent, Egyptian-led approaches to meeting the aspirations of the Egyptian people,” said a statement issued by his spokesperson.

Egypt has been undergoing a democratic transition following the toppling of President Hosni Mubarak two years ago in the wake of mass protests. Last month, renewed protests – in which dozens of people were killed and wounded – led to the Egyptian military deposing President Mohamed Morsy. The Constitution was then suspended and an interim government set up.

Ban applauded the “deep courage and commitment” of the Egyptian people over the past two years in exercising their rights to peaceful assembly and freedom of expression in support of their respective visions for moving Egypt forward, said the statement.

“Yet in light of current tensions and given the risk of potential violence, the Secretary-General also believes it is of critical importance that all sides in Egypt – those in positions of authority as well as those protesting in the street – should urgently reconsider their current actions and language.

“For this reason, the Secretary-General urges Egyptians to set aside or avoid actions and words likely to be perceived by others as provocative,” the statement continued. “Instead they should try to look creatively at new approaches toward a genuinely inclusive political process that would be rooted in reconciliation. In the Secretary-General’s view, political strategies need to adjust to evolving circumstances and realities if they are to serve their country.”

Ban called on those in authority, on all sides, to exercise their leadership and their responsibility to do whatever can be done to prevent further loss of life among the Egyptian people.

“As long as they avoid the path of violence, the Secretary-General is confident that the Egyptian people, representing one of the world’s great and historic civilizations, will successfully find a way forward. The United Nations remains fully engaged in supporting Egypt.”