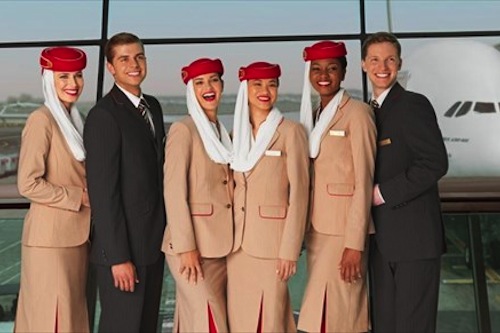 The Emirates Group has today announced it 25th consecutive year of profit and company-wide growth ending the year in a strong position despite continuing high fuel prices and a weak global economic environment. The financial year also ended with some very positive newly reached capacity milestones throughout the business.

“Achieving our 25th consecutive year of profit in a financial year with our largest ever increase in capacity across the network is an achievement that speaks to the strength of our brands and our leadership,” said His Highness (H.H) Sheikh Ahmed bin Saeed Al Maktoum, Chairman and Chief Executive, Emirates Airline and Group.

Despite a difficult operating environment, the Group continued to invest in and expand on its employee base, increasing its overall staff count by 12 per cent to 68,000.

Emirates continued with its growth plan and during the financial year saw the largest increase in capacity in the airline’s history receiving a staggering 34 new aircraft, the highest in any single year and an unprecedented achievement. These aircraft were funded by raising more than US$ 7.8 billion, also a first, through a variety of financing structures. Overall capacity measured in Available Tonne Kilometres (ATKMs) increased by 5.5 billion tonne-kilometres. Other significant capacity increases include launching 10 new destinations across six continents, shipping more than 2 million tonnes of cargo for the first time and carrying an additional 5.4 million passengers over last year, the highest increase in a financial year.

Highlighting its sound financials and investor confidence, Emirates raised more than AED 28.6 billion (US$ 7.8 billion) in new funding mainly to secure its on-going fleet expansion, a record amount for the airline. This impressive total included US$ 587.5 million financing for additional A380’s with a bond that used the debt capital market in the U.S., a first for a non-U.S. airline in years. Emirates also issued a 10-year amortised Sukuk for US$ 1 billion and raised US$ 750 million with a 12-year amortised bond matched to the payment cycle for the aircraft. It further includes more than AED 20 billion (US$5.4 billion) raised through finance and operating leases.

“We move into the new financial year with confidence and a clear vision of where we are headed. We understand that succeeding in this industry requires determination and we are unapologetic about our drive to be the best,” added Sheikh Ahmed.

Emirates revenue reached a record high of AED 73.1 billion (US$ 19.9 billion) growing by 17 per cent when compared to the 2011-12 financial year. Although the average price of jet fuel did not increase over last year, it remains high and has impacted Emirates’ bottom line with the airline’s profit at AED 2.3 billion (US$ 622 million) representing an increase of 52 per cent over last year’s results.

Carrying a record 39.4 million passengers, an increase of 16 per cent, Emirates logged a robust Passenger Seat Factor, at 80 per cent, remaining consistent with last year’s results. With an increase in seat capacity-Available Seat Kilometres (ASKMs) of 18 per cent the result highlights a strong consumer desire to fly on Emirates’ state-of-the-art aircraft.