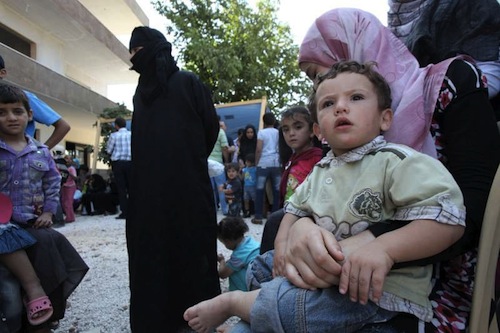 Top United Nations officials raised the alarm on a deepening humanitarian crisis in Syria, where over 2.5 million people now need urgent assistance and protection, and urged enhanced international support to respond to the growing crisis.

Deputy Secretary-General Jan Eliasson told a meeting of the Security Council that the most pressing needs include water and sanitation, food and shelter, blankets and health care. Access to health facilities has become difficult or impossible in some areas due to violence, checkpoints and fuel shortages, while food prices have tripled in some areas.

“To meet the humanitarian pressure, we need to urgently address two main issues,” Eliasson said, citing humanitarian access and funding. He highlighted the need for the Syrian Government to authorize more international non-governmental organizations to operate in the country, and for UN agencies to expand their presence.

At the same time, security has to be improved, he added. “I urge Member States to emphasize to the Government and opposition groups the urgency of guaranteeing the security of aid agencies operating in areas under their control to allow for safe access to civilians and for evacuation.”

He reported that, as of yesterday, the $180 million Humanitarian Response Plan is only half-funded, with some critical sectors having received almost no funding at all. “Donors should urgently rise to this humanitarian imperative. Hundreds of thousands of lives are at stake.”

More than 18,000 people, mostly civilians, have died since the uprising against President Bashar al-Assad began nearly 18 months ago. There have been reports of an escalation in violence in recent weeks in many towns and villages, as well as the country’s two biggest cities, Damascus and Aleppo.

Both the Government and the opposition have chosen the path of armed confrontation, with no immediate prospect of an end to the fighting and resolution of the conflict, said the Deputy Secretary-General.

Civilians and non-combatants, including women and children, face “systematic slaughter,” with almost daily reports of atrocities, most recently in Daraya, he added. “These recent accounts of possible war crimes are deeply troubling, and should give us all further impetus to work to end this nightmare.

“Those responsible in Government and the military forces, as well as armed opposition groups, must be held accountable for gross human rights violations, war crimes and crimes against humanity.”

Also addressing the ministerial-level meeting of the Council was UN High Commissioner for Refugees António Guterres, who said that the escalation of armed conflict in Syria has led to a “dramatic and deepening” humanitarian crisis.

As of yesterday, 229,000 people had left the country and sought refuge in neighbouring countries such as Iraq, Jordan, Lebanon and Turkey.

“By keeping their borders open to refugees in such a complex and challenging environment, the countries which neighbour Syria are providing a very positive example to the world,” said Guterres. “But their capacities are being severely tested. International solidarity in support of their generosity must be urgently reinforced.”

He too appealed to all parties to grant unrestricted humanitarian access inside Syria, and to respect and provide protection to Iraqi, Palestinian and other refugees inside the country. He also called for enhanced international support to all victims of the conflict.

“I urge all States to respond positively to the two appeals that will shortly be made by the humanitarian community for additional funding in countries of asylum and inside Syria. But direct support to the victims is not enough. International solidarity must translate into effective burden-sharing and meaningful support to governments and communities in refugee-hosting countries.”

He also asked all States in the region and beyond to continue to extend protection to the Syrians fleeing their country, and to ensure that the civilian and humanitarian character of asylum is maintained.

Efforts to resolve the conflict in Syria will continue under the leadership of the Joint Special Representative of the UN and the League of Arab States on the Syrian crisis, Lakhdar Brahimi, who begins his new role on 1 September.

Mr. Brahimi takes over the peace-facilitation role which has been carried out since February by former UN Secretary-General Kofi Annan, who sought to bring an end to all violence and human rights violations in Syria and promote a peaceful solution to the conflict.

Today’s meeting was chaired by Laurent Fabius, the Minister of Foreign Affairs of France and President of the Security Council for August, and also heard from officials from several regional countries, Council members and the representative of Syria.