EU: Egypt should return rapidly to a legitimate government 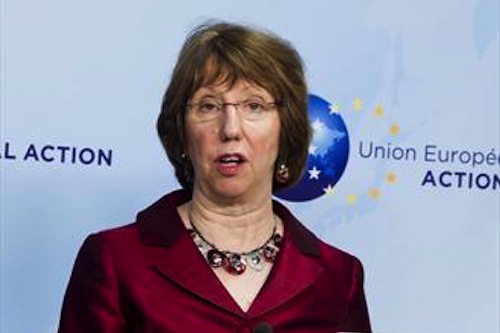 The High Representative of the European Union for Foreign Affairs and Security Policy Catherine Ashton issued the following declaration today on behalf of the EU:

“The EU is following the recent developments in Egypt with deep concern. The military must accept and respect the constitutional authority of the civilian power as a basic principle of democratic governance. It is of utmost importance that Egypt returns rapidly to a legitimate government and democratic structures responding to the democratic and socio-economic aspirations of the Egyptian people. The EU stresses in particular the importance of holding democratic elections in the shortest possible time.

The EU calls for a broad-based and substantial dialogue, inclusive of all those political forces committed to democratic principles. It is for the Egyptian people to decide on the way forward, including a path to free and fair elections in which all parties can compete, and work to agree a constitution as a solid foundation for a united, democratic and prosperous Egypt with the checks and balances of a democratic system that respects the rights of all Egyptian citizens as key elements of Egypt’s transition. National reconciliation is paramount in this. A successful outcome will depend on the free participation of all political actors, including the Freedom and Justice Party, which we encourage to do so.

The EU took note of the constitutional declaration and the timetable presented by the interim President, and strongly urges that the rule of law, including accountability, human rights and fundamental freedoms, in particular of assembly and expression, religion or belief, as well as the right of fair trial are fully respected. All media must be free to function and journalists should not be penalised as a consequence of their professional work.

The EU urges the interim authorities to make every effort so that politically motivated arrests and other forms of harassments do not take place. All political detainees must be released, and criminal cases reviewed swiftly in a transparent manner.

Peaceful protest must be permitted and protected by the authorities. Sexual violence must be stopped. The EU deplores the violence and use of excessive force involved in the recent clashes, offers its deepest condolences to the families of those killed and wishes a rapid recovery for the wounded. The EU takes note of the investigations opened in this regard which it trusts will be independent, thorough and timely.

The EU remains concerned about the continued deterioration of the Egyptian economy. The EU invites the Egyptian interim authorities to take urgent and concrete measures to tackle the economic challenges.

Two and a half years ago the Egyptian people demanded freedom, dignity, and social justice. The aspirations for a better Egypt are as strong and urgent as ever. It is vital for their own country and the region that all sides rise above self-interest and work towards an open, democratic and reforming Egypt.

The EU will continue to monitor the situation closely and, on the basis of the principles set out above, stands ready to engage with the interim government.”