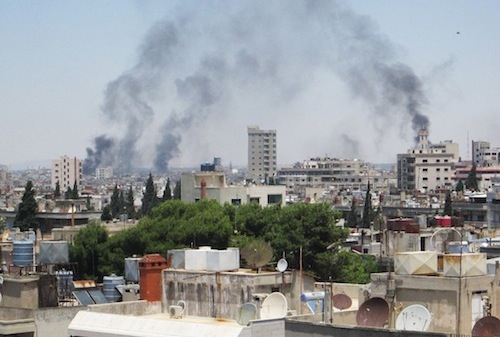 In the conclusions on Syria of the Foreign Affairs Council meeting in Luxembourg it is argued that the European Union strongly condemns the brutal violence and massacres of civilians, many of them children and women, such as in the town of Houla on 26 May, and in the villages of Qubair and Maarzaf in Hama province on 6 June. It is also appalled by reports on the use of children as human shields. The EU welcomes the UN Human Rights Council resolution adopted on 1 June, condemning the deteriorating human rights situation in Syria and the horrific killings in Houla. It urges the Syrian regime to end immediately the killing of civilians, withdraw the Syrian army from besieged towns and cities and to allow for a peaceful transition for the sake of the country. President Assad has no place in the future of Syria. The EU looks forward to the outcome of the investigation by the Independent Commission of Inquiry on Syria into the massacre in Houla. The EU urges the Syrian authorities to fully and immediately cooperate with the Commission. The EU recalls that all those responsible for widespread, systematic and gross human rights violations must be held accountable.

“The EU recalls its full support to Joint UN- League of Arab States Special Envoy Kofi Annan’s mission and his six-point plan. It welcomes the full deployment of the United Nations Supervision Mission in Syria (UNSMIS), but regrets that the escalation of violence led to the suspension of UNSMIS observation activities on 16 June. It recalls that the Syrian authorities are responsible for ensuring the security and safety of the mission and for facilitating the resumption of the unobstructed work of the mission. It strongly condemns the attacks against UN monitors.

The EU condemns all actions aimed at obstructing the implementation of Annan’s six point plan. It reiterates that the main responsibility for the ceasefire and the implementation of the plan lies with the Syrian authorities. The EU warns against further militarisation of the conflict and sectarian violence which will bring enormous suffering to Syria and risks having a tragic impact on the region. The EU calls on all parties to refrain from using violence and in particular on the regime to fully implement the Annan plan. The EU recalls that the six-point plan is not an open-ended offer.

The European Union condemns the unacceptable shooting down by Syria of a Turkish military plane on 22 June. It offers its sympathies to the families of the airmen involved, and commends Turkey’s measured and responsible initial reaction. The European Union notes that this is a matter which needs to be investigated thoroughly and urgently. It calls on Syria to cooperate fully with Turkey and allow full access for an immediate investigation, and for the international community to give its support to such efforts. The European Union urges Syria to ensure that it complies by international standards and obligations.

The EU calls on all the States concerned, and in particular the Members of the UN Security Council, to continue to support Kofi Annan and use all their influence to ensure that UNSC resolutions 2042 and 2043 are fully implemented. The EU calls for united action by the UNSC to add more robust and effective pressure, including the adoption of comprehensive sanctions under Chapter VII. In this respect, it welcomes Annan’s efforts to work with key international partners exercising a positive influence in the region to move the political process forward. The EU takes note of the discussion on Syria during the EU-Russia Summit on 3-4 June and reiterates the importance of Russia’s engagement in support of a peaceful political process which must lead to a democratic transition.

The EU looks forward to the next meeting of the Friends of the Syrian People Group that will be held in Paris on 6 July to maintain international pressure on the Syrian regime and support Annan’s six- point plan.

The European Union remains committed to the Syrian people’s struggle for freedom, dignity, democracy and human rights. The EU continues to urge the Syrian National Council and other opposition groups to put aside their differences and to agree on a set of shared principles and start working towards an inclusive, orderly and peaceful transition in Syria. A stronger and more united opposition that represents a credible alternative for all Syrians is essential. The EU calls on all opposition groups to actively and fully support the implementation of the Annan plan.

The EU welcomes the outcome of the third Syria Humanitarian Forum held on 5 June. The EU calls on the Syrian authorities to fully cooperate and ensure the rapid implementation of the humanitarian response plan, including immediately allowing full unhindered and safe access to humanitarian workers and delivery of humanitarian aid. The EU fully supports the humanitarian initiative to urgently evacuate non-combatants and the wounded from Homs and calls on all parties to allow the evacuation of children, women, elderly and injured from conflict zones. The EU will continue to support the efforts made by neighbouring countries to host Syrian refugees who fled violence in Syria.

The EU approved today the designation of new persons and entities to be subject to restrictive measures. The EU will continue its policy of imposing additional measures targeting the regime, not the civilian population, as long as repression continues. The EU will also continue to urge the international community to join its efforts, in taking steps to apply and enforce restrictive measures on the Syrian regime and its supporters. In this context, the EU welcomes the second meeting of the International Working Group on Sanctions which was held in Washington on 6 June. It calls on all Syrians to dissociate themselves from the repressive policy of the regime in order to facilitate a political transition.”