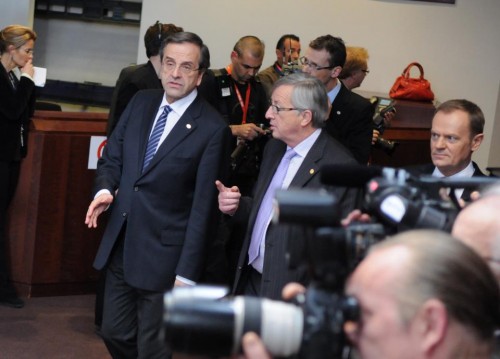 The European Union’s efforts to stimulate economic growth and reduce unemployment were central in an address by Prime Minister Antonis Samaras to the European Union Council in Brussels yesterday.

According to sources, the Greek premier expressed satisfaction at the fact that the EU was now turning its attention to invigorating economic growth, underlining that specific initiatives and actions should be taken to this direction, AMNA reports.

Samaras referred specifically to the energy sector, noting that price hikes have actually erased the comparative advantages achieved by Greece through labour cost cuts. The high-energy prices and the consequences on both sect oral and regional levels should be discussed at May’s EU Council, Samaras told the meeting.

Meanwhile, government sources from Brussels expressed confidence that ‘there is no problem with the March tranche,’ stressing that the conditions set by troika will be met within a reasonable time. Sources told protothema.gr, the tranche of March, of EUR 2.8 billion, would be evaluated in the informal Eurogroup of April.

As they said, for the approval of this tranche Greece’s lenders have set two conditions: the issue of medicines, which has already been addressed, and the issue of administrative reform, which is still being discussed

According to a statement by the European Commission, ECB and IMF on Greece: “Staff teams from the European Commission, the ECB and the IMF have conducted discussions with the Greek authorities during the last two weeks regarding the review of Greece’s economic programme. Significant progress has been made but a few issues remain outstanding. As additional technical work will be necessary to settle these issues, the mission will take a short break to allow this work to be completed. The mission plans to return to Athens in early April to continue its work.”