Posted on: September 3rd, 2016 by AlYunaniya Staff No Comments 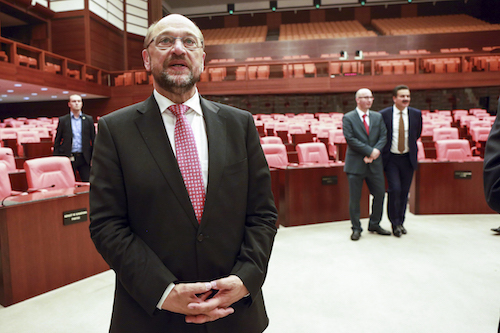 A coup attempt, terrorist attacks, a war at the border and three million refugees… Turkey faces difficult times as do its relations with the EU. Ankara has accused the EU of not condemning the coup attempt enough and demanded that the EU lifts visa restrictions or otherwise it could put an end to the refugee deal concluded earlier this year. Meanwhile the EU wants visa conditions to be fully met and is concerned about the rule of law and the country´s desire to reintroduce the death penalty.

“The European Parliament remains a committed supporter in advancing and deepening EU-Turkey relations,” said Schulz. He also paid tribute to “all the Turkish citizens who courageously took to the streets to defend democracy in the country” and called for the political dialogue to be set on the right footing once again: “We need to talk to each other rather than at each other.”

In a media briefing afterwards, the Parliament President said: “Essentially we largely agreed on the necessity to openly discuss our different point of views in order to develop common views from this open dialogue that bring us closer to each other again.”

On 30 August the foreign affairs committee discussed the results of the fact-finding mission to Ankara on 23- 25 of August.

MEPs expressed their concerns about the Turkish government response to the attempted coup. Thousands of people – including soldiers, judges and journalists – have been detained for questioning while some of them have also lost their job. Committee chair Elmar Brok, a German member of the EPP group, said: “Even before the coup d’état in Turkey, developments as regards the freedom of opinion were not acceptable and took Turkey farther away from EU.”

MEPs, including Dutch S&D member Kati Piri who wrote a progress report on Turkey’s efforts to become an EU member, agreed that that the attempted coup was an attack on Turkish democracy. However, they stressed that the way the country is handling the aftermath of the coup is a crucial test for the country´s democracy, especially when it comes to respecting human rights and the rule of law. MEPs also said that Turkey must meet all criteria in order to have visa restrictions lifted.

Photo: Official visit of President of the European Parliament to the Republic of Turkey.