Europe responds to the acute humanitarian needs in Syria 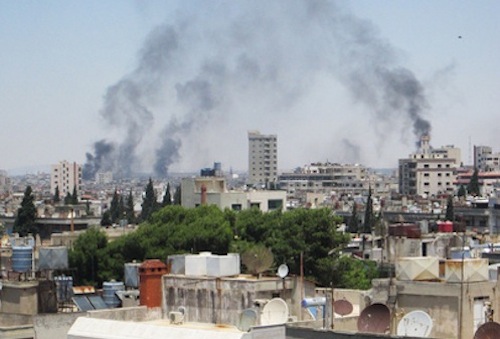 The European Commission is doubling its aid for emergency medical care, shelter, food and water to those Syrians most affected by the ever-worsening crisis, both inside and outside the country. An additional €20 million of relief aid will bring the European Commission’s total assistance in this crisis to €63 million (€40 million in humanitarian aid). The EU Member States have contributed to date € 27.5 million in humanitarian aid.

The European Commissioner for International Cooperation, Humanitarian Aid and Crisis Response, Kristalina Georgieva, said: “With the violence spiralling out into a full blown civil conflict hundreds of thousands of Syrians are in a desperate situation. The needs are huge inside the country but also on the increase in the neighbouring countries which face a larger influx of Syrian refugees as I saw for myself when I met Syrian refugees in a camp at the Turkish border with Syria. The scaling up of the EU assistance is the most concrete expression of our solidarity with the Syrian people affected by the conflict”.

The additional funding will go to projects which provide food, water, sanitation, shelter, medical support and supplies, as well as psychological support for an estimated 1.5 million Syrians inside the country as well as to Syrian refugees.

The Commissioner reiterated: “Once again, in the strongest of terms, I call on all parties to protect civilians, including humanitarian workers. The shooting at ambulances and the targeting of aid workers has to stop”.

The Commission will continue to channel its funding through its humanitarian partners, including the International Committee of the Red Cross and the UN Refugee Agency (UNHCR), who are uniquely placed to ensure that the delivery of humanitarian aid based on the principles of humanity, neutrality, impartiality and independence.

In addition, €23 million were recently allocated to assist the Syrian people to cope with the unrest and its consequences including medium-long term assistance to Internally Displaced People or people who have fled to neighbouring countries. The Commission is also reserving extra funds for Syria and the consequences of the unrest, to be used inside Syria or in neighbouring countries.

Between 1.5 and 3 million people are affected by the violence in Syria, while the entire civilian population is suffering from shortages of both food and fuel. Over 113,000 people have already fled the country and are being hosted and protected by neighbouring countries, mainly Turkey, Lebanon and Jordan and Iraq. Host countries have been working to meet the most basic needs of refugees and to ensure minimum protection.

The intensification of violence inside Syria has hindered the capacity of humanitarian workers to provide essential relief to populations in need. Lack of information has also prevented the international community from analysing and monitoring the overall extent of the situation and thereby hampering a full and comprehensive humanitarian response.

Syria also hosts some 500,000 Palestinian refugees and other 87,000 Iraqi refugees. The needs of the refugee population in Syria have inevitably grown as a result of loss of employment opportunities, devaluation of the currency, and inflation. The European Commission has already increased its 2012 humanitarian budget for the Iraqi crisis by €2 million to boost the support to the most vulnerable Iraqi refugees in Syria.

The needs of the Palestinian refugees in Syria are being addressed by the United Nations Relief and Works Agency for Palestine Refugees in the Near East (UNRWA) to which the EU is a major donor.