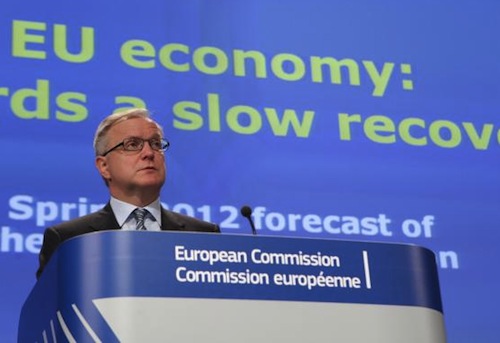 Following the output contraction in late 2011, the EU economy is estimated to be currently in a mild recession. While uncertainty about economic and financial prospects remains high, strong policy actions and major advancements in the EU institutional framework have brought about an easing of financial market tensions in the beginning of 2012 and a tentative stabilisation of confidence, expected to further strengthen over the forecast period. Together with an expected acceleration in global growth, the recovery is forecast to set in slowly from the second half of the year on. The picture presented in the interim forecast in February is broadly confirmed for 2012, with real GDP projected to stagnate in the EU and to contract by -0.3% in the euro area. For 2013, growth is forecast at 1.3% in the EU and 1.0% in the euro area. Unemployment is expected to remain high at 10% in the EU and 11% in the euro area over the forecast period. Inflation is set to moderate gradually as the impact of higher oil prices and tax increases fades away. Fiscal consolidation is forecast to progress, with public deficits in 2013 declining to 3.3% in the EU and just below 3% in the euro area. The economic situation differs considerably across Member States, also in view of the ongoing adjustment to the large disparities in external positions and structural conditions that have come to the fore over the last years.

Olli Rehn, EU Commissioner for Economic and Monetary Affairs and the Euro said: “A recovery is in sight, but the economic situation remains fragile, with still large disparities across Member States. We are witnessing an ongoing adjustment of the fiscal and structural imbalances built up before and after the onset of the crisis, made worse by the still weak economic sentiment Without further determined action, however, low growth in the EU could remain. Sound public finances are the condition for lasting growth, and building on the new strong framework for economic governance, we must support the adjustment by accelerating stability and growth-enhancing policies.”

According to the report, the contraction in Greek economic activity in the fourth quarter of 2011 was far deeper than expected. The quarterly accounts indicate that real GDP fell by 7.5% in the last three months of 2011, compared with the same quarter of 2010. For the year as a whole, real GDP is estimated to have contracted by 6.9%. In 2012 a further contraction is expected, resulting from both a significant fall in internal demand and less dynamism in exports than expected. Households’ disposable income being hit by rising unemployment, cuts in private sector wages and the fiscal measures will keep domestic demand contracting. Also, unfavourable business and consumer sentiment and difficulties in access to credit for firms and households will contribute to their postponing spending decisions. The recovery, which was previously expected for this year, will be further delayed with, at best, an insignificant improvement in activity in 2013.

Employment has taken a heavy blow in the face of contracting economic activity. Total employment declined by almost 7% in 2011 and an additional fall is forecast in 2012, with the unemployment rate projected at 20%. Labour market reforms are expected to provide a significant contribution towards both stabilising the employment level and creating new jobs in the medium-term perspective; however, employment is not expected to stabilise before 2013, and the subsequent recovery in the number of jobs will be slow.

The 2011 general government deficit fell to 9.1% of GDP from 10.3% of GDP in 2010. The decline in the deficit ratio resulted from an increase in the revenue-to-GDP ratio of 1.2 pps., while the primary expenditure ratio as a share of GDP fell by 1.4 pps. The increase in interest expenditure of more than 1 pp. means that the improvement in the primary deficit was almost 21⁄2 pps. The general government consolidated gross debt in 2011 was above 165% of GDP, up from 145% of GDP in 2010.

In 2012 the general government deficit is projected at 7.3% of GDP, which is consistent with a target for the primary deficit of 1% of GDP. To achieve this objective, the Government adopted cuts in expenditure of 1.5% of GDP in the first quarter. The Government aims at achieving a primary surplus of 1.8% of GDP in 2013. Based on current projections, this would require additional expenditure savings of 3.8% of GDP to be identified in coming months.

The implementation of the debt exchange (private sector involvement or PSI) will help to put Greek public finances back on a sustainable path. However, given the sluggish economy, the debt ratio will only start to decline in a sustainable manner after 2013.