Fair trials still out of reach in Libya – Amnesty Int. 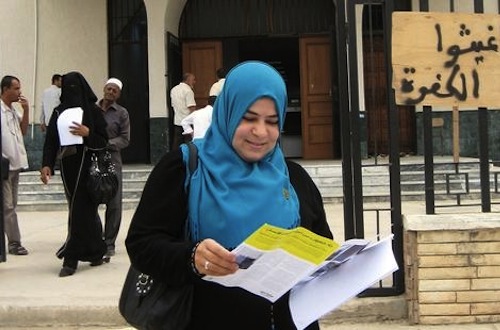 Two years ago, when Asma Sariba wrote articles for Libyan opposition websites based abroad, she put herself and her family at great risk.

Back then, she did not shy away from using her real name, even posting her picture. Today, she is one of the 33 women serving on the 200-member General National Congress after Libya’s historic national elections on July 7, which followed four decades of repression under Moammar -Gadhafi.

Asma Sariba realizes that a great deal of responsibility lies on the shoulders of the Congress, which inherited a country struggling to break the legacy of systematic human rights violations and a population severely damaged by eight months of armed conflict.

Among her top priorities are the establishment of the rule of law and the disarmament of the hundreds of armed militias that have plagued Libya since the “declaration of liberation” on October 23 last year. Across the country these have continued to act above the law, abducting and detaining victims in secret detention facilities, torturing them – sometimes to death – and terrorizing the general population.

On September 2, two armed groups clashed in the city of al-Zawiya, 50 kilometers west of Tripoli, leading to nine deaths, including bystanders and others not involved in the fighting. Two women were also injured during confrontations.

Asma Sariba is well aware of the violations committed by armed militias. On March 26, an al-Zawiya militia arrested her brother Mohamed Sariba, a university professor, without a warrant and held him incommunicado at their base for nearly two weeks.

One of his lawyers claimed that he was beaten and insulted while there. He is now facing trial on charges of “offending the Libyan people” – an accusation leveled against him by one of his former female students who alleged that he insulted her when she criticized Gadhafi’s government back in April 2011. His trial before the al-Zawiya Criminal Court was adjourned as soon as it began on September 3.

Unlike thousands of other detainees accused of supporting or fighting for the former government, Mohamed Sariba faces formal charges.

But the new Libya’s nascent judicial system has yet to function properly.

The general prosecutor in al-Zawiya admitted to Amnesty International that prosecutors and judges are working in a difficult and tense environment in light of the armed militias’ de facto authority in many areas.

He gave an illustrative example from early summer. A group of thuwwar, as anti-Gaddafi fighters are commonly known, got angry at what they considered to be a light sentence imposed on an alleged Gadhafi supporter. They barged into the courtroom and insulted and threatened one of the judges.

In a separate incident in late June, a group of armed men abducted a public prosecutor in al-Zawiya. They held him for several hours before dragging him into the prosecution’s office demanding he be punished for ordering the release of a detainee they accused of committing crimes. They only left when other members of the prosecution promised to conduct an investigation.

Needless to say, such interference in the judicial process and the general climate of intimidation are not conducive to fair trials. The lack of control that enables armed men to enter courtrooms and attend trials is a testament to the climate of fear, and the risks judges face when ruling against public sentiment.

Few lawyers are willing to defend alleged Gadhafi loyalists – some for ideological reasons; others simply out of fear of reprisals. A member of al-Zawiya’s lawyers’ association told Amnesty International that one of his colleagues was approached by armed men who offered him money or other work opportunities in return for dropping his defense of an alleged Gadhafi loyalist.

Asma Sariba told Amnesty International that while the General National Congress discussed the situation of Libyan prisons, she condemned arbitrary arrests and detention and raised fair trial concerns. Some of her colleagues supported her, but later that evening, insulting articles and comments appeared online – accusing her and her detained brother as being Gadhafi loyalists and criminals.

The stigma of being labeled a Gadhafi supporter, compounded with fears of reprisals, prevents many Libyans – including victims – from publicly condemning ongoing human rights abuses. Even those who spoke out and lodged complaints with the prosecution have yet to see justice.

Members of a criminal investigation committee in al-Zawiya acknowledged to Amnesty International that while they opened investigations into deaths under torture at the hands of armed militias and called in some witnesses and suspects for questioning, they were helpless to make any arrests or bring formal charges.

They vowed to keep cases open and bring to justice all those responsible for deaths as a result of torture as soon as “the security situation allows.” Fair trials were also promised when security improves.

But, in the meantime, victims are left waiting for justice and thousands of detainees – like Mohamed Sariba – have a feeble chance of receiving a genuinely fair trial.