Posted on: December 22nd, 2012 by Romana Turina No Comments

Fatal shooting down of UN helicopter in South Sudan 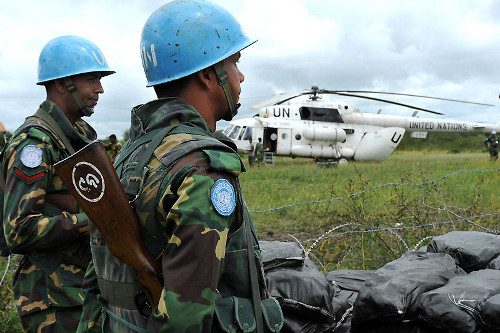 The shooting down yesterday of a United Nations helicopter near Likuangole, in Jonglei state of South Sudan by the Sudan People’s Liberation Army (SPLA) was condemned by Secretary-General Ban Ki-moon, who called for those responsible to be held to account, his spokesperson said today.

The Russian-crewed MI-8 helicopter, part of the UN Mission in South Sudan (UNMISS), had been on a on a reconnaissance flight at around 10:00 a.m. local time over the settlement of Likuangole, in the eastern state of Jonglei. The reconnaissance was related to efforts to identify suitable landing places to facilitate the protection of civilians work in the state. There were no passengers onboard.

The members of the Security Council also responded to the incident, which they “strongly deplored” in a press statement issued late Friday: “They stressed that this accident constituted a grave violation of the Status of Forces Agreement of August 8, 2011 and jeopardized the UNMISS operations,” the statement added. “They strongly urged the UNMISS and the Government of South Sudan to conduct a swift and thorough investigation of the accident.”

UNMISS has begun an investigation to establish the circumstances around the incident. The Mission had immediately launched a search and recovery operation, which confirmed the death of all four crew members.

“The Secretary-General calls on the Government of South Sudan to immediately carry out an investigation and bring to account those responsible for this act,” Mr. Ban’s spokesperson said.

“In light also of previous incidents,” he added, “the Secretary-General demands that the Government of South Sudan urgently puts in place reinforced measures within the SPLA to ensure that no such event may reoccur in the future.”

In their press statement, the members of the Security Council echoed the Secretary-General on these points, as well as in expressing “heartfelt condolences” to the families of the four crew members and to the Russian Federation. UNMISS expressed similar sentiments in an earlier statement.