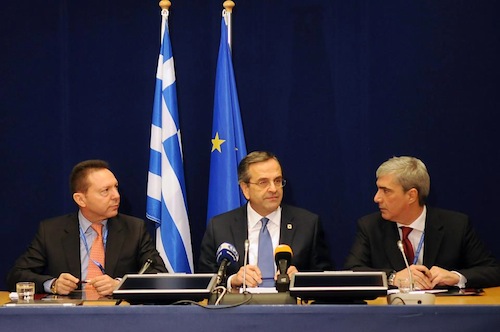 The Finance Ministry confirmed that April was the first month this year that the targets for both direct and indirect taxes were achieved, as the budget deficit is less than half of what had been forecast.

The primary deficit amounted to EUR 306 million, down from EUR 1.73 billion in the January-to-April period last year and a target for EUR 3.613 billion this year. Net state budget revenues came to EUR 15.743 billion in the year to end-April, posting a rise of EUR 786 million or 5.3% from the target of 4.957 billion.

The revenues from the Public Investments Programme posted an increase of EUR 655 million from the target, reaching up to EUR 1.715 billion. State expenditure came to EUR 18.168 billion, posting a considerable decline by EUR 2.53 billion from the target set by the budget, and of 28.2% or EUR 7.123 billion from the same period last year, when Greece paid interest for the bonds included in the debt restructuring (PSI).

Meanwhile, Finance Ministry sources told tovima.gr that the troika representatives are expected to return to Athens on the 4th of June for the next evaluation.

The EUR 4.2 billion loan installment that Greece collected last Friday was used to pay off bonds worth EUR 5.6 billion on Monday that the European Central Bank held.

FinMin Yannis Stournaras is focusing on collecting the remaining 3.3 billion euros loan, which has conditionally been approved by the Eurogroup. The three conditions are to submit a detailed plan for combating corruption, a new plan for indebted households and the deregulation of the energy market.

However, the recent European Commission’s report indicates that the Greek government has not implemented many of the agreements. Of the 420 necessary actions stipulated in the terms of the third bail out loan (December 2012) 139 of them have not implemented, a rate of 33%. The Ministries of Labor and Health have the highest “fail” rates.

The government’s financial staff has a lot to prepare for in time for the troika visit, such as reducing the number of tax offices to 140 for the entire country, voting in the new law on the taxation of real estate property (by the end of June) and increasing the jurisdiction of General Secretary of Public Finances.