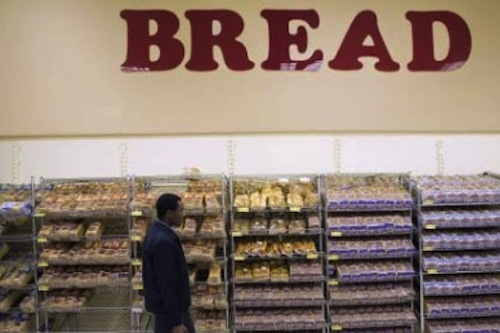 Global food prices dropped to their lowest levels since June 2012 driven by continued declines in prices of cereals and oils, the United Nations Food and Agriculture Organization (FAO) reported today, while also forecasting a bumper harvest for this fall.

FAO’s Food Price Index – which measures monthly changes in international prices of a basket of meat, dairy, cereals, oils and fats, and sugar – dropped nearly four points to 201.8 last month, down 5.1 per cent from August of last year.

The drop in grain prices “reflects expectations for strong growth in world cereal production this year and, especially, a sharp recovery in maize,” the FAO said in reference to corn.

Global production of maize is forecast to rise to 983 million tonnes. The bulk of that figure originating in the United States where maize production is expected to reach 343 million tonnes this year, some 25 per cent higher than the 2012 drought-reduced level.

Higher maize crops are officially reported in Argentina and improved prospects in the European Union and Ukraine.

Meanwhile, coarse grain output is predicted to expand 10.5 per cent to 1,285 million tonnes, while the wheat to a 7.6 per cent rise to 710 million tonnes.

World rice production is set to increase by 1.3 per cent, reaching a new high of 497 million tonnes, in milled equivalent.

The boosts have led to a revised forecast of overall world cereal production upwards 14 million tonnes to 2,492 million tonnes, according to a separate FAO report. This would be 179 million tonnes higher than in 2012 and a new record.

The Rome-based agency said that based on the latest forecasts, total use of cereals for direct human consumption is set to expand by 1.2 per cent to 1, 094 million tones.

The FAO Oils/Fats Price Index averaged 185.5 points in August, 5.7 points below the July value and the third consecutive monthly decline.

Dairy prices, FAO noted, averaged 239.1 points in August, 2.8 points more than in July and 37 per cent above its level in August last year. Prices rose last month for all dairy products in the Index except butter due to export supply limits in major trading countries.

The FAO Meat Price Index averaged 175.0 points in August, an increase of 2.2 points.