‘Friends of Syria’ refrain from a call for military action 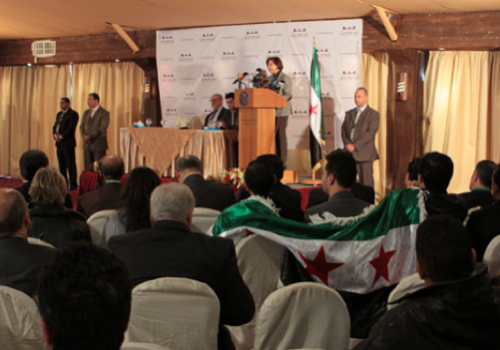 Over 100 delegations met in Paris on Friday at the “Friends of Syria” conference calling for authorization of sanctions in an attempt to force Syria into a political transition plan but refrained from a call for use of armed force to end the 16-month conflict.

The “Friends of Syria” conference, which was held in Paris on Friday, called in its final statement for President Bashar al-Assad to step down.

Members of Syria’s opposition at the Paris meeting said the international community is still moving too slowly and called for a military measure to end the crisis, according to Al Arabiya.

The meeting came amid reports that Manaf Tlas, a Syrian general and personal friend of Assad has defected and fled Syria.

According to French Foreign Minister Laurent Fabius on Friday, the son of Mustafa Tlas, who served as defence minister for 30 years under former president Hafez al-Assad and Bashar al-Assad had defected and was heading for Paris, Al Jazeera reported.

The meeting in Paris follows a gathering in Tunis and another in Istanbul, both of which called in vain for stiffer action against Assad’s government. China and Russia did not attend either of those meetings.

Meanwhile, U.S. Secretary of State Hillary Clinton urged world powers to show Russia and China would “pay a price” for blocking progress toward a democratic transition in Syria.

In response to Clinton’s comments Russia said on Friday, that Washington’s suggestion that Moscow should “pay a price” for helping the Syrian regime stay in power was “incorrect” and refused such allegations.