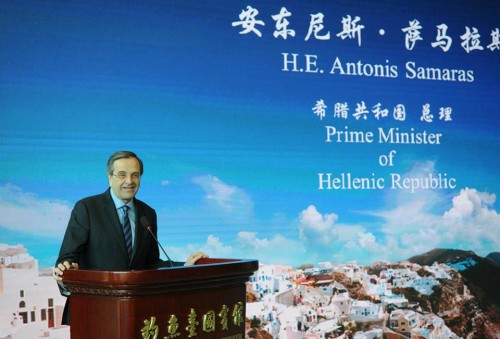 On the last stop of his five-day visit to China,Prime Minister Antonis Samaras on Saturday told a Hellenic Chinese business forum in Shanghai that Greece is “steadily developing into a success story”, adding that the country can easily become “a major gateway of China to the European hinterland”.

“Greece is determined to fight and win this battle; there is no other alternative for us. And we are winning,” Samaras said in a speech addressed to Greek and Chinese businessmen, enet.gr writes.

The Premier repeated that the fears of a “Grexit” are now becoming the certainty of a “Greekovery”. “Having achieved a safe political, fiscal and financial environment, we are currently implementing innovative structural changes,” Samaras said.

The Prime Minister invited investment in the fields of shipping, tourism, food and beverage, pharmaceuticals and new technologies, using Cosco’s presence in the port of Piraeus as an example of a successful Chinese investment in the country.

Samaras went on to praise the Greek and Chinese civilisation, pointing to the countries’ long history and their world-renowned philosophers. “We should not forget that Socrates and Confucius lived at the same period and are world-widely acknowledged as the fathers of philosophy,” he said.

Meanwhile at a speech at the Chinese Academy of Social Science Samaras said: “Chinese Culture and Greek Culture gave “meaning” to human societies, across the borders and across the ages. They both provided time-transcending ideals, principals, norms, rationality, ethics and aesthetics that enriched spirituality, beyond short-lived intellectual fashions, trivial concerns or momentary impressions.”

“Indeed, we are so different in size, location on the globe and social systems. And yet so similar in other respects: we both suffered dramatically from foreign aggression and occupation during the Second World War. Our peoples fought on the same side of the anti-fascist war and endured a lot of suffering. And this binds us together even more. Finally, we both went through periods of painful transformation after the War. And we have covered a very long way in a very short time these last decades… In a short and shallow perspective, we seem to be on different “trajectories” or in opposing “phases”. But in a broader and longer perspective, our destinies are closer than most “outsiders” can suspect.”