Posted on: June 19th, 2013 by AlYunaniya Staff No Comments 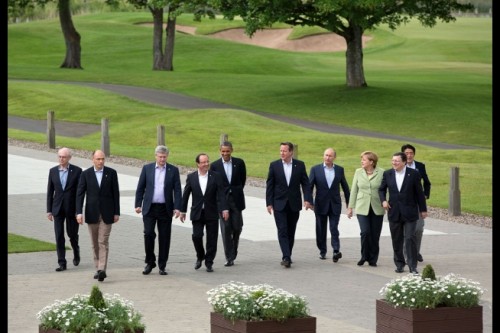 The G8 leaders have wrapped up their summit in Northern Ireland by strongly endorsing calls for a peace conference on the Syria conflict “as soon as possible”.

“We strongly endorse the decision to hold as soon as possible the Geneva Conference on Syria to implement fully the Geneva Communiqué of 30 June 2012, which sets out a number of key steps beginning with agreement on a transitional governing body with full executive powers, formed by mutual consent,” the communiqué stated.

However, the final communiqué failed to mention the fate of the Syrian President Bashar al-Assad.

Instead it condemned the use of chemical weapons generally and said the UN should be allowed to do an objective investigation.

The G8 leaders also expressed their deep concern “at the appalling human tragedy” that the UN estimates has cost the lives of over 93,000 people and led to 4.2 million internally displaced persons and 1.6 million refugees.

“We acknowledge the vital humanitarian role played by neighboring countries hosting Syrian refugees, above all Lebanon and Jordan, in dealing with the significant economic and security pressures they are facing as a result of the conflict and refugee influx,” it added.

Meanwhile, divisions remained as Russia stood by its embattled ally rejecting reports of Assad’s regime using chemical weapons and said at his closing news conference that there is no proof that the Syrian government used the weapons.

The Syria conflict has put at odds Russia and Washington saying last week that it would start arming the rebels against the Syrian regime.

Putin, said that Russia would not rule out new arms supplies.

“We are supplying arms to the legitimate government in accordance with legal contracts,” Putin told a news conference according to AFP.

Other issues that dominated the meeting were tax evasion and transparency.