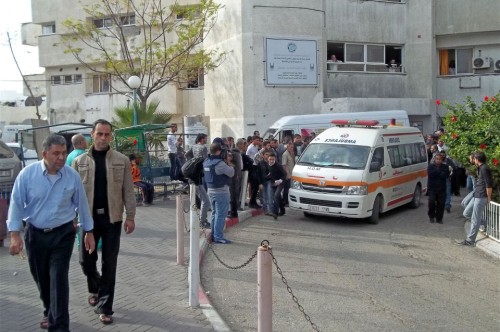 The civilian death toll in Gaza has continued to rise as Israeli continues to pound Gaza for a seventh day, amid a diplomatic push to achieve a truce, with the overall death toll reaching   over 100 people, according to medical sources.

Israel launched over 100 attacks on sites across the Gaza Strip on Tuesday, bombing the headquarters of a bank and the home of a Hamas commander, according to Maan news agency.

The Israeli military has struck more than 1,350 targets in Gaza since attacks began on Wednesday, in an operation to deter Palestinian fighters from launching rockets into its territory.

Since then, 640 rockets have hit Israel while more than 300 others have been intercepted by Israel’s anti-missile system, the Iron Dome, according to the Israeli army. Three Israeli civilians died on Thursday in a rocket strike.

The Israeli military said that 67 rockets had been fired at the country on Monday, and that three Israelis had been wounded while more than 30 people were killed in Gaza on Monday, according to Al Jazeera.

Meanwhile, the UN agency assisting Palestinian refugees expressed its concern for the rising death toll reiterating its call for all sides to stop the violence.

“The situation [for civilians] is bad,” said the spokesperson for the UN Relief and Works Agency for Palestinian Refugees in the Near East (UNRWA), Christopher Gunness. “This is a very densely populated place. There are many, many civilians. More than half of Gaza’s 1.7 million people are children, and what we are seeing are rockets flying out of this area, populated largely by civilians, and airstrikes coming in.”

“We are echoing the call of Secretary-General Ban Ki-moon in appealing to all sides to exercise utmost restraint, to de-escalate so that peace can begin to take hold,” Mr. Gunness said. “All sides must honour their obligations under international humanitarian law to protect civilians.”

Efforts are also underway in Cairo for reaching a truce. Egypt has been trying to broker a ceasefire with the help of Qatar and Turkey.

Khaled Meshaal,  the Hamas leader, said on Monday his group was committed to efforts to secure a truce, but insisted that Israel must lift its six-year blockade of the Gaza Strip.

During a briefing to reporters this afternoon, Mr. Ban’s spokesperson said Mr. Ban will meet with Egyptian President Mohamed Mursi and the Secretary-General of the League of Arab States, Nabil El-Araby today, and, later this week, with Israeli Prime Minister Benjamin Netanyahu and the President of the Palestinian Authority, Mahmoud Abbas.