Posted on: April 4th, 2013 by Dimitris Ioannou No Comments 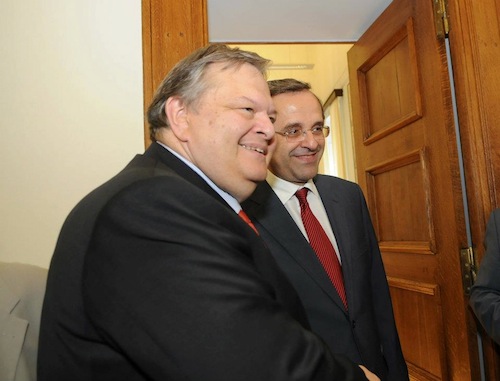 Coalition partners agreed yesterday night to adopt a uniform position in upcoming negotiations with troika representatives, who have returned to Athens to continue talks with the government.

After talks last night with Prime Minister Antonis Samaras and PASOK chief Evangelos Venizelos, Democratic Left leader Fotis Kouvelis said that the coalition would approach the troika with a “common position that the emergency property tax be replaced with a new unified property tax,” Kathimerini reports.

Finance Minister Yannis Stournaras, who also attended the meeting, told reporters that “the special levy on properties (EETHDE), will continue to be collected through electricity bills (DEH) in 2013”, and efforts will be made to reduce the amount of the tax for those citizens already paying it off, AMNA informs.

The government’s intension is to apply as of 2013 a reduction in the property tax of up to 10%, later rising to 15%. However, according to reports, the exact amount of reduction in the levy will be finalised after negotiations with the troika.

“We extensively discussed all pending issues on the negotiations agenda (with the troika), as the talks must be concluded in order for the (rescue loan) tranche to be disbursed,” PASOK party leader Evangelos Venizelos said in a statement after the end of the meeting.

Troika head representatives are due to resume talks with the government, starting with a meeting with Finance Minister Yannis Stournaras later today. Several issues that have remained unresolved are expected to return on the table, such as the reduction of the number of civil servants, with 25,000 workers expected to enter a mobility scheme this year. Also, the recapitalization of Greek banks has yet to be completed, with the troika expressing doubts about the merger between National Bank and Eurobank. There will also be discussions about how many installments Greeks should be allowed to pay off their overdue taxes.