Posted on: May 30th, 2012 by AlYunaniya Staff No Comments 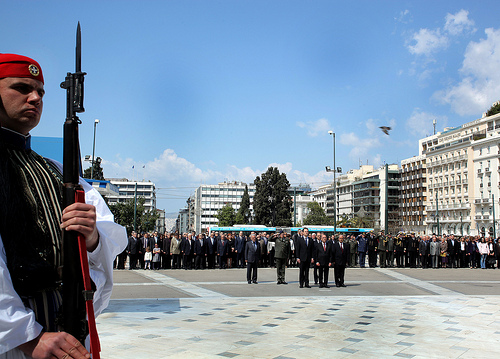 The General Director of Political Αffairs, Mr. Zografos, expressed his outrage and strong condemnation over the recent massacre of civilians including dozens of children in Houla, to the Syrian ambassador in Athens, on Tuesday.

During their meeting at the Ministry of Foreign Affairs, Mr.Zografos said that Greece strongly condemns the killings and calls on the Syrian regime to immediately halt violence, according to news247.

He said that Syria should comply with the relevant resolutions and the unanimous Security Council statement of last Sunday.

He noted further that the Syrian regime has still not yet fulfilled key obligations under the Plan “six points” of the Special Envoy of the United Nations and the Arab League, Kofi Annan, stressing that it should proceed to the immediate and strict implementation of the Plan.

He noted furthermore, that Syria has not fully complied with a U.N.-backed peace plan for the country brokered by UN-Arab league envoy, Kofi Annan, stressing that Syria should proceed to the immediate and strict implementation of the Plan .

The mass killings in Houla, one of the deadliest attacks in the 15-month uprising has brought widespread international criticism of the Syrian regime as western Countries across the globe expelled Syrian diplomats Tuesday in a coordinated move in protest at the Houla massacre.