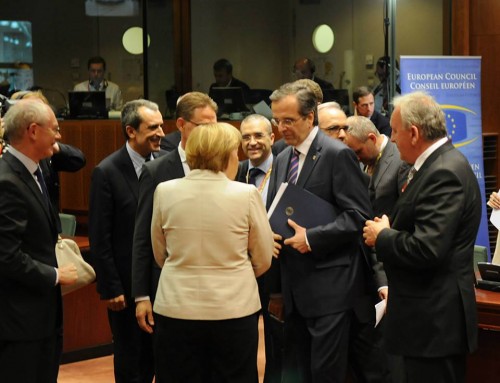 Government and the troika appeared to reach an unofficial compromise during the weekend over public sector reforms, although no agreement has been reached.

“We made very good progress,” Poul Thomsen, head of the IMF’s mission to Greece told reporters yesterday, adding that he hoped talks would be concluded early today, before the Eurogroup meeting of finance ministers.

Finance Minister Yannis Stournaras also said he was optimistic of a deal on Monday morning. The two sides were due to leave Athens yesterday, but could remain in touch to nail down final details, Reuters informs.

Government sources have suggested that the troika is in a position to complete its review of the adjustment programme and allow Eurozone finance ministers to decide later today whether to release another EUR 8.1 billion of bailout funding.

According to Kathimerini, a deal seems to have been clinched after the troika inspectors accepted Administrative Reform Minister Kyriakos Mitsotakis’ plans for completing a labour mobility scheme involving 12,500 civil servants.

However, Mitsotakis had to agree in return that the programme would run for eight months rather than 12. It appears that as a result of agreeing to shorten the duration of the scheme, Mitsotakis will be allowed until the end of September to identify all 12,500 public sector workers who will be transferred to other positions.

“It is sealed, there will not be any more meetings regarding the public sector,” Mitsotakis said on Saturday afternoon. “All that is left is for the Eurogroup to give its approval.”

According to sources, 5,000 of those who will be included in the programme will be local authority employees, including school crossing guards and cleaners. Some 3,500 municipal police officers will also be added. They will undergo an evaluation and for every one that is transferred to the main police force, another three will be dismissed. Another 2,000 employees are to come from the education sector, while ministry personnel will also be added once the restructuring of government departments is completed.

The two sides also appear to have reached an agreement over a supposed funding gap of about EUR 2 billion for this year and next. The Greek government said that it would “claw back” much of the overspending at healthcare provider EOPYY by forcing private clinics that worked with the public organization to accept reduced payments.

There were also reports that the troika agreed to the seasonal reduction of value-added tax in the food service sector from 23 to 13 percent in return for a rise in tax on luxury goods.

The next tranche of international aid for Greece could be split into installments, EU commissioner Olli Rehn said, holding out the prospect of a continued hand-to-mouth existence for Greece that threatens to stifle its economy.

According to media reports, Rehn confirmed what many officials have expressed privately amid growing frustration with Athens’ slow pace of reform, namely, that the tranche could be split into several installments.