Posted on: July 16th, 2012 by AlYunaniya Staff No Comments

Greece: government on a deadline 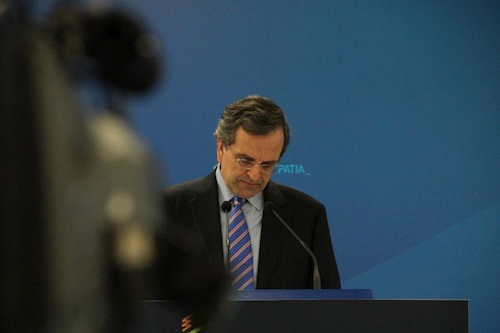 An attempt to draw a plan for cutting EUR 11.6 billion in public expenditure by 2016 is underway by the government, while troika representatives are due to return to Athens on July 24, for a review of state finances.

According to protothema.gr, the aim is to select the most painless cuts that will not pose an immediate danger to the weaker sections of society, the basic functions of the State or national security. Troika technical teams that remain in the country have identified that in recent years all types of social benefits (excluding pensions) have significantly increased. Thus, they are pressing so that benefits are reduced to the levels, which existed before Greece’s entrance in the euro.

In an effort to avoid reducing special public sector wage payrolls, the government has already sent the Troika a proposal for additional reduction of 10% – 20% in the operating expenses of ministries. Especially for the military, the proposal is that EUR 40 million needed this year and EUR 120 million for next year come by transfer payments and reviewing armament contracts.

In a discussion with reporters after the meeting at the Ministry of Administrative Reform earlier today, Prime Minister Antonis Samaras expressed his intention to personally undertake the monitoring of administrative reform and evaluation of public administration, according to protothema.gr. Samaras said that he would personally monitor the overhaul of the civil service, including the evaluation of personnel and slashing of red tape, Kathimerini writes. Administrative Reform Minister Antonis Manitakis said the aim was to reduce the number of civil service departments by about 30%. He added that the ministry is based on the groundwork that has already been done with the collaboration of Greek services with the Task Force, and that in September he will be able to show tangible results.

Within the next few days, the Premier intends to send letters to all ministries, which will emphasize the importance of administrative reform for the economy, businesses and citizens, and will ask ministers to speed up procedures.

Meanwhile, IMF Managing Director Christine Lagarde said in an interview with CNBC. “In the case of Greece, implementation must happen, more than lip-service.”

Lagarde said the new coalition government in Greece is saying the right things. “I’m quite pleased to see that the Greek authorities are aware of the fact that they have to demonstrate their determination to own, adopt and implement the program. Because I think that ́s a quid pro quo that was not necessarily in place previously. That change of attitude I think was warranted, is welcome, and will help have a better dialogue with the authorities.”