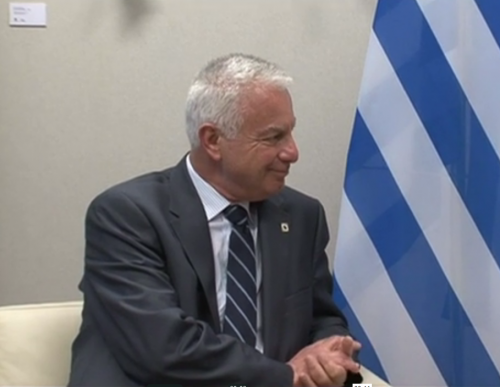 Interim Prime Minister Panagiotis Pikrammenos called on Greek shipowners “to support our country at this difficult time,” during his address at the inauguration of the international shipping exhibition Posidonia 2012, the world’s leading maritime exhibition held in Greece every two years.

Pikrammenos voiced confidence that shipping can become a vehicle for getting out of the current economic crisis saying that “more than ever, Greece needs new investments, new jobs. And you people of shipping you can contribute decisively in this area.” The Premier noted that “Posidonia” is an event of international reach and reputation, adding that “this year’s presence of an important number

of exhibitors and a large number of representatives from the international economic, banking and shipping community is a “vote of confidence” in Greek shipping and thus the prospects of Greek economy. It is a message of optimism for all Greeks.”

The Prime Minister stressed that currently “we need to highlight and strengthen even more those dynamic sectors of the economy that manage -by investing in excellence, healthy competition, openness, people- to excel within and outside Greece, creating wealth and employment, return income to the Fatherland. Shipping has always been such an activity. Shipping is interwoven with the nature and character of Greeks. It is written in our DNA. And has offered too much to the country.”

More than 17,000 executives from the Greek and international shipping communities are expected to visit the state-of-the-art Metropolitan Expo venue during the five-day event which occupies 45,000 square metres of floor space setting a new participation record with 1,870 exhibitors from 87 countries, according to a press release by the organizers.

From 2000 to 2011 the Greek shipping industry, operating the world’s largest commercial fleet with 3,325 vessels , contributed approximately 154 billion euros to the nation’s economy, according to the Greek Shipowners Union.