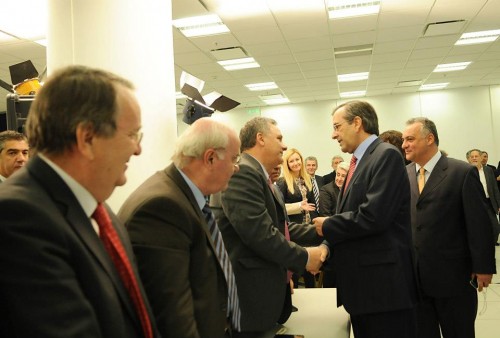 The multi-bill was voted shortly after midnight yesterday, with 153 ‘yes’, 128 ‘no’, while 18 MPs kept a neutral stance, voting ‘present’. One MP abstained from the vote.

The vote, however, came at a cost for the coalition as it lost several MPs, Kathimerini writes. PASOK leader Evangelos Venizelos ejected six lawmakers from his party for voting against the package. This included former minister Costas Skandalidis, who was rumored to be mounting a leadership challenge. The move reduces the number of PASOK lawmakers to 27. One MP was ejected from New Democracy, reducing the conservative party’s tally of deputies to 126.

Coalition party Democratic left MPs voted ‘present’ yesterday; the party said it would back the 2013 budget in a vote on Sunday. Parliament will vote again on the 2013 budget, which provides

Addressing Parliament a few hours before the vote, Prime Minister Antonis Samaras appealed to MPs to back the package, noting that Greece’s future in the Eurozone was at stake, Kathimerini writes. “Today we are voting on whether we stay in euro or we return to isolation,” he said. Samaras admitted that cuts to salaries and pensions were unfair but insisted that they would be the last and any “future adjustments” would be limited to curbing tax evasion and waste. He said the changes being pursued by his government constituted “a revolution.”

PASOK leader Evangelos Venizelos struck a similar note, saying that Greece had two options. “One is dramatically difficult, the other total disaster,” he said. The Socialist leader lashed out at the leader of main opposition, accusing him of “investing in the country’s political death” by calling for new elections.

SYRIZA leader Alexis Tsipras repeated demands for snap polls, noting that the coalition had reneged on its promises. Tsipras said the government’s efforts to secure an extension for fiscal adjustment were redundant. “The only extension we need is for the rope with which we will hang ourselves.”

Democratic Left leader Fotis Kouvelis defended his party’s opposition to changes to labour laws. “Some insist that labour reforms are a secondary issue. That is not so. Labor laws are a road map for Greece after the crisis.” “We don’t want to be part of rebuilding the country after a collapse,” he said.

Between 70,000 and 100,000 people gathered outside Parliament from about 6 p.m. to protest ahead of the vote. The peaceful protest was broken up later when rioters clashed with police. Molotov cocktails were thrown and officers responded with tear gas and water cannons.