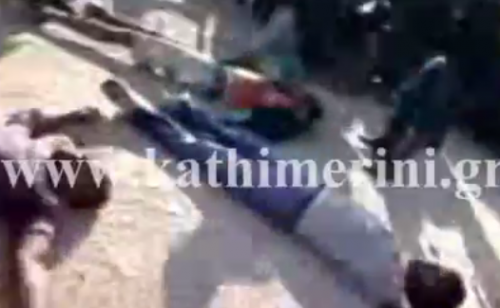 Greek authorities on Thursday pledged ‘swift and exemplary’ punishment for the three foremen of a strawberry farm near the village of Nea Manolada who are accused of opening fire on a group of Bangladeshi workers on Wednesday afternoon, injuring 28.

“The injuries suffered by protesting farm workers in Manolada are being condemned in the most absolute manner by the entire Greek society,” government spokesman Simos Kedikoglou said in a statement Thursday.

“This unprecedented and devastating act is foreign to Greek morals and the reaction of the authorities will be swift and exemplary,” he said.

The exclusive video uploaded by ekathimerini on its website, displays footage filmed shortly after the shooting occurred, with immigrants lying down injured.

The incident occurred when some 200 workers allegedly demanded six months’ worth of unpaid wages from their employer and then became involved in a dispute with three Greek foremen.

Meanwhile, police are seeking the three suspects who disappeared after Wednesday’s shootings.

The owner of the farm, was arrested on Wednesday, charged as a moral accomplice to attempted manslaughter, according to ekathimerini, while police said they had arrested a 38-year-old man accused of hiding two of the foremen at his home on charges of harboring criminals.

According to reports, some of the migrants remained hospitalized on Thursday, but none have life-threatening injuries.