Greece: Samaras sworn in as PM 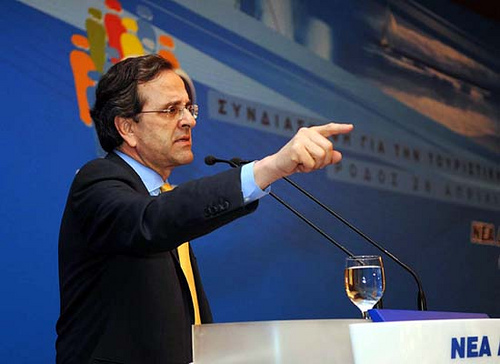 Antonis Samaras, the leader of the conservative New Democracy party who came first in Sunday’s election, was sworn in as the new prime minister on Wednesday, after a coalition agreement was struck with two other minor parties that support Greece’s bailout commitments.

New Democracy party will join forces with the socialist PASOK party led by Evangelos Venizelos, which came in third place, and the Democratic Left led by Fotis Kouvelis which have pledged to withhold the country’s bailout commitments.

Discussions on the lineup of ministers are expected to be completed by Wednesday night, according to AP.

Samaras, 61, was sworn in three days after his party won the second national elections in less than two months but without enough votes to form a government on his own.

The new prime minister was to meet with outgoing Finance Minister Giorgos Zanias, PASOK head Evangelos Venizelos and Kouvelis on Wednesday evening, according to AP. Zanias is to represent Greece at an upcoming meeting of eurozone finance ministers.

All three parties in general back Greeces vows to withhold the country’s bailout commintments although they have pledged to renegotiate some of the terms for the rescue loans.

Greece has been dependent on rescue loans from other eurozone countries and the International Monetary Fund since May 2010. In return, it has imposed austerity measures that have plunged the country in its fifth year of recession.

Meanwhile, Kathimerini reported that European officials are examining the possibility of extending Greece’s fiscal adjustment period, which runs until the end of 2014, by two years, sources in Brussels said.

The Eurogroup is due to meet in Brussels on Thursday, where Greece’s situation is to be discussed.