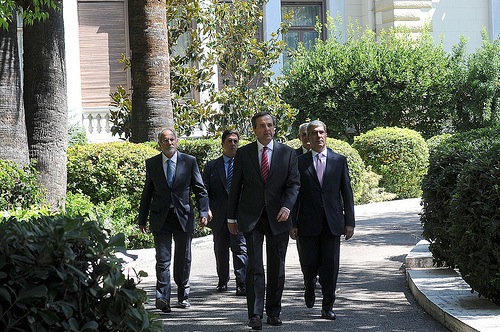 The specifics of the new austerity package remain open after yesterday’s meeting between Prime Minister Antonis Samaras and his coalition partners Evangelos Venizelos and Fotis Kouvelis. Further talks will be held next week.

According to Kathimerini, Finance Minister Yannis Stournaras, who also attended the meeting, told reporters that the “basic scenario” for the measures had been finallized but that further talks would be held on issues of “minor significance”, including on proposals for additional wage cuts for certain categories of civil servants such as military and judicial staff and priests.

The package is to be presented to troika envoys, due in Athens next week, for approval. Senior government officials have made clear that the new measures will include across-the-board cuts in pension benefits as well as wage reductions and layoffs in the broader public sector, Capital.gr writes.

“We did not go into details about the measures. This will happen in the coming days and we will meet again,” Venizelos said. “The treatment of measures is incomplete,” Kouvelis said, and took the chance to reiterate that he is categorically opposed to the horizontal cuts, protothema.gr reports.

Venizelos said the party leaders would continue talks to ensure the cuts were “balanced and just” and did not “destroy the middle class”, according to Reuters.