Greek crisis in a few words 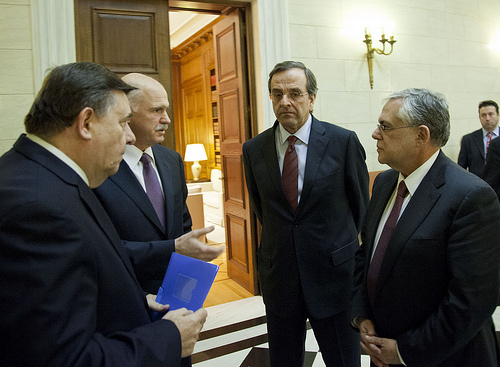 Since 2009, Greece has been unwinding fiscal and external imbalances, but through deep recession. Real GDP has declined by more than 13 percent since 2009. Private investment led the downturn in 2009, while public retrenchment started only in 2010. With falling incomes and employment, private consumption took over as the main driver of the recession in 2011.

Competitiveness gains are not yet evident on an economy-wide basis, and the current account deficit has remained close to 10 percent of GDP. Productivity growth turned positive only at the end of 2011 as labor market adjustment gathered speed. However, this has come at the cost of rapidly rising unemployment. The slow adjustment despite deep recession owes much to wage and price rigidities in labor and product markets and a small tradables sector.

The fiscal deficit has improved considerably by about 6 ½ percentage points of GDP between 2009 and 2011 despite the steep recession. Still, the primary deficit achieved in 2011 of 2 ½ percent of GDP remains well below the long-run debt stabilizing level of a 1 ½ percent of GDP primary surplus. The recession and losses from government debt exposures have taken a deep toll on the banking system, leaving banks undercapitalized and necessitating a higher level of public support.

According to an IMF report, the Greek authorities’ economic program aims, over time, at restoring competitiveness and growth, attaining fiscal sustainability and financial stability. While building on progress made under the 3-year Stand-By Arrangement (SBA), the authorities recalibrated their program strategy to place additional emphasis on the implementation of structural reforms to accelerate economic growth and employment.

Strengthening competitiveness: The program aims to make the labor market more dynamic to improve competitiveness, strengthen growth and reduce unemployment. Enhanced measures to reduce rigidities in the product and service markets will be implemented to increase competition and decrease prices. Through ambitious privatization and steep reductions in bureaucratic barriers to investment, the government aims to restore investment and growth.

Improving the fiscal position: The program provides room for structural reform impacts in 2012, targeting a primary deficit of 1 percent of GDP. The bulk of fiscal adjustment, however, will take place in 2013-14 to bring the primary balance to the new target of 4½ percent of GDP. To improve the fiscal position, the government will focus on improving tax collection, but even with an ambitious effort in this area some 5½ percent of GDP in additional spending cuts will be needed. These will focus on reducing the size of government and more efficiently targeting social transfers. The core safety net will be strengthened to protect the most vulnerable in society.

Restoring financial sector stability: Significant resources will be set channeled to help banks cope with the impact of the recession and the restructuring of government debt. Government support will be structured so as to provide incentives to maintain private ownership where feasible. The framework for bank resolution and recapitalization and for financial sector oversight will also be strengthened, to ensure effective stewardship of bank recapitalization funds, and effective oversight of the system.

Reducing debt levels: A combination of private and official sector involvement is expected to deliver enough debt relief to place debt on a trajectory to fall below 120 percent of GDP by 2020 under the program baseline.

Finally, growth in 2012 is expected to be in the range of -4½ to -5 percent, given the dominant influence of fiscal adjustment and labor market reforms. The recovery is expected to begin, quarter-over-quarter, in 2013, and benefit from moderate cyclical developments in 2014-2016.