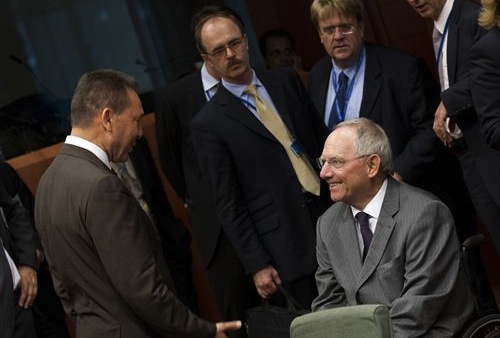 According to media reports, the government will have to decide on the implementation of voted austerity measures of EUR 3 billion within the next 15 to 20 days, until troika representatives return to Greece; their final report will determine September’s EUR 32 billion tranche.

According to protothema.gr, some of these measures are: cuts (12%) of special payrolls for judicials, academics, state doctors. Amount saved could reach EUR 1 billion if the measure includes military personnel, although the government is looking for an alternative equivalent measure; additional pension cuts of EUR 300 million; EUR 500 million cuts in pharmaceutical costs of insurance funds; privatizations of Popular Lottery SA (Laika Lacheia), IBC Olympic venue, DEPA and DESFA, which could bring over EUR 1 billion euros by the end of the year. If Elliniko is sold too then the final amount may be considerably higher.

The Finance minister said the troika will return to Greece on July 24 and the Greek government will discuss the possibility to replace some measures with others of an equivalent effect, in terms of deficit impact.

EU Council, in its recommendation on Greece argued, inter alia: “…The release of the tranches is based on compliance with quantitative performance criteria and a positive evaluation of progress made with respect to the policy criteria laid down in Council Decision 2011/734/EU of 12 July 2011 addressed to Greece with a view to reinforcing and deepening fiscal surveillance and giving notice to Greece to take measures for the deficit reduction judged necessary to remedy the situation of excessive deficit1 (as amended on 8 November 20112 and 13 March 20123) and the Memorandum of Understanding on Specific Economic Policy Conditionality, which was signed on 14 March 2012…”

Speaking to reporters after the meeting of the EU finance ministers, FinMin Yannis Stournaras said that his eurozone colleagues were inflexible concerning the implementation of measures in Greece in 2012. According to ANA, he confirmed that he did not submit a request for an extension to the country’s bailout program, expressing his confidence that “when the time comes (the request) will be made”.

In an interview with CNBC in Brussels, Stournaras said no decision on the matter had been taken at Monday’s meeting of euro zone finance ministers, because it was still unclear what such an extension would mean in terms of financing for the country.

“They [the troika] ask us to bring the program back on track before anything else. So the situation is quite difficult, it’s not easy,” Stournaras told CNBC. He believes that, “privately,” everybody accepts that an extension is reasonable. “Certain difficulties, which we should clarify with the troika in the weeks to come. So we definitely have indicated that we are going to raise this issue,” Stournaras said. He expected a decision “towards the autumn.”