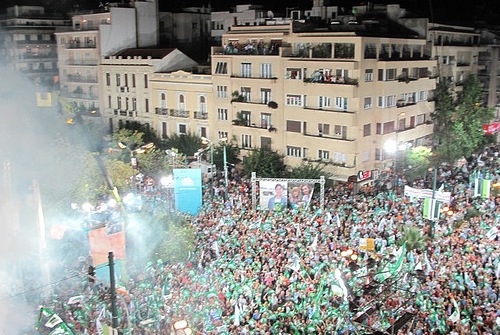 The movie Monster’s Ball with Billy Bob Thornton and Halle Berry draws its title from a custom in medieval England of referring to prisoners awaiting execution as “monsters”. The night before their execution, their jailers would hold a farewell feast known as a “monster’s ball.”

Greek national election on May 6 is a farewell to local politics, as we knew it. In the minds of people, traditional partisanship is dead. For a series of reasons; some of them are: corruption and scandals, inability to change things, cheap clientelism, obsolete rhetoric (‘rhetoric made of wood’ Greeks call it), refusal to modernize their operation, denial to speak clearly of their government past.

Both major parties that claim an ability to govern the country seem to forget their long record of failures. Venizelos’ PASOK is trying to collect its remains after a painful 2 1⁄2 years of governance under the auspices of the Memorandum, whereas ND is trying to return in the game after failing to effectively manage two election mandates in 2004 and 2007.

“I am asking for a clear mandate so we can embrace all Greeks,” said Samaras yesterday in a speech at Zappeion. “It is easier for PASOK to lead the polls than ND to earn absolute majority in Parliament”, answered Venizelos. Polarisation and fear management seem to be the only way forward for the two major parties, since they both need to build up maximum power to enter a post-election coalition scheme that is crucial in order to deliver on the country’s obligations to its lenders.

In this framework, Samaras continues to aim high, towards the chimera of 150+1 seats in Parliament, dragging Venizelos along; the latter develops a rather complex rhetoric of self-criticism and post-PASOK era realism. Below-the-line activity includes hitting on the far right or left parties that seem to gain ground, capitalizing on their traditional ability to play with the fear of the electorate. The political establishment uses the same means in its attempt to deal with the extremes. Mainstream media have entered the fear game, playing the neofascism threat card, whereas archive photographs from the Junta period started appearing on political websites, refreshing connotation Greeks would like to forget.

Are rough partisan antagonism, polarisation and fear tactics the best ways to deal with elections in the 21st century? Obviously not. However, is Greece living in the 21st century? The diary states so, but reality suggests otherwise; it seems that most people’s mentality has stopped in the ‘80s, in the early PASOK years of the triumph of statism, protectionism, clientelism and ad hoc political mannerisms. About that time, Greeks lost their ability to fight for progress.

As days go by, upcoming national elections seem more and more of a colossal mistake Greek people may have to pay dearly the day after. IMF’s Lagarde, in a recent speech aimed at Greece with… three painful words: implement, implement, implement. Harsh words perhaps only Lucas Papademos can explain in full, as their meaning will be severely tested after May 6.

Thomsen is clever enough to schedule his visit to Athens after the Monster’s Ball. Hopefully he will find someone in charge to talk to; even if this is Laurel and Hardy in bed together.

Dr. Demetris Kamaras is the Editor of AlYunaniya