Posted on: September 12th, 2013 by Dimitris Ioannou No Comments 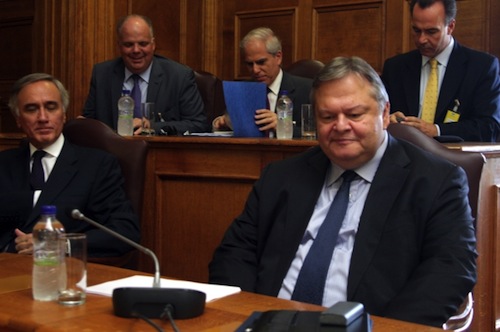 The situation in Syria

“Our country, like all the EU member states, without exception, expressed from the outset a position that emphasizes two major, central points, which are firm aspects of our policy.

The first is the unequivocal, clear and absolute condemnation of the use of chemical weapons, condemnation of any attempt to hinder the work of the UN experts. The need for there to be a clear response from the international community; a response that will prevent any repetition of the use of chemical weapons, which is a heinous crime, a crime against international law, against humanity, which, of course, creates the need for specific perpetrators to answer to international criminal justice.

The second point of the Greek stance is that, whatever the case, the political process must be safeguarded, and that the solution in Syria can come only through the Geneva II process.

In all our statements we have said and continue to say that Greece will honor its obligations, first, as a member state of the UN – thus we believe in the need for the UN processes – second, as a member state of the EU and NATO, and third, of course, we do not ignore the obligations deriving from bilateral agreements that are in force with various countries on security and defence issues.

In Vilnius, at the informal Council of Foreign Ministers, the EU expressed – with great delay, it is true – its agreed position on this issue. It was expressed by Lady Ashton following in-depth consultation with all the Ministers, and this common position is exactly what Greece had said from the very outset. What we have said is also the EU’s stance.

We believe that this process can produce results. That is, that this initiative can truly succeed if there is a willingness to de-escalate. And for this initiative to succeed it must take on specific physical form; that is, the turning over and destruction of the chemical weapons, and secondly it must lead to unconditional participation in Geneva II by all parties, including the Assad regime, so that a mutually acceptable and broadly mandated transitional solution can be found. With the “pending” issue of those who are physically and morally responsible being brought before international criminal justice.

In Syria, Greece needs to follow a policy of principles, and this is what we have done from the outset. A policy based on respect for international law, the need to defend human rights. We cannot close our eyes to abhorrent actions that are a crime against humanity. The core of our policy must be international legality, the role of the UN, the role of the Security Council; we must respect our obligations as a member state of the EU and NATO.

There is a protective network for Greek citizens in Syria, through the honorary Consulates, in collaboration with the EU, if evacuation should be needed. There is ongoing notification, which, in the end, however, concerns a few dozen interested parties – an impressively small number of interested parties – and naturally there are all the preparations with the co-competent Ministries of National Defence, Public Order, Merchant Marine, Health, Interior regarding a possible wave of refugees from Syria reaching Greece, but in a second stage. Because the countries land borders are receiving the great bulk: Jordan, Lebanon, and Egypt via Sinai to a great extent.

As such, I think that this preparation will pay off, and we have already asked the competent Commissioners – many competent Commissioners are involved under Georgieva, who is dealing with the humanitarian aid, in order to fund our actions on migration and health issues, should the need arise. This is the picture with regard to Syria.”

“Egypt is decisive for Greece with regard to the Eastern Mediterranean. Bilaterally and on the level of the EU, we initially saw the changes that took place after 30 June in Egypt as a continuation of the transitional period that started in 2011, with the fall of the Mubarak regime. We perceive the situation in all its difficulties, and we think that the transitional government is making very great efforts to stabilize the country and lead it to the full functioning of democratic institutions.

I visited Cairo on 5 September, following the visit carried out by the Belgian Minister in the framework of his scheduled visit to the countries of the region, and following the visit to Cairo two days earlier by Cypriot Foreign Minister Kasoulides. This visit was of very great significance, because it was a practical show of support for the Egyptian people and of Greece’s sincere interest in Egypt’s once again finding a road to peace and prosperity.

We are linked by historical and profound ties – the Patriarch of Alexandria, the Monastery of Sinai – in a pivotal region for current developments. Mainly northern Sinai, but also southern Sinai, where the Monastery is located, the historical Greek communities in Alexandria, in Cairo, in Suez, in other cities, the new Greek economic presence in Egypt, which is very significant. Greece is the fifth largest foreign investor in Egypt. We have manufacturing units and banks. Of course, we have common interests.

I must be clear and say to you unequivocally that in the time leading up to the change of the state of affairs in Egypt there was inertia and regression in our relations, particularly on the critical issue of maritime zones and the implementation of the International Law of the Sea. It is of very great significance that – as my Egyptian counterpart and I stated publicly after our meeting – we decided to re-establish and initiate the dialogue on the level of experts on a bilateral level – with international law as our frame of reference – so that the maritime zones, the continental shelf and exclusive economic zone in the Eastern Mediterranean, can be agreed upon.

It is also very important that we reaffirmed through my visit, which followed on Mr. Kasoulides’ visit, that, beyond bilateral relations, we are prepared to move ahead to trilateral cooperation between Egypt, Greece and Cyprus in the Eastern Mediterranean on all the political issues, as well as on anything else that is necessary.

I had the opportunity to see the interim President of the Republic, the President of the Constitutional Court, the Prime Minister. We had in-depth talks with the Foreign Minister and the Delegation. I saw one of the candidates for President of the Republic in the elections that were carried out; that is, the head of the Al-Nour party, which is the large salafist party that got 27% in the parliamentary elections and that supports the transitional government and is also represented in the 50-member committee for drawing up the Constitution.

I think it was a very successful visit for our national interests and for the level of Greek-Egyptian relations, as well as for trilateral Egyptian-

Greek-Cypriot relations. Within the framework of my visit to Cairo, I met with the Secretary General of the Arab League, which, as you will have observed, is playing a very important role in the Syrian crisis. Because the Gulf countries and Egypt – which met on the level of Foreign Ministers with Mr. Kerry in Paris the day before yesterday – as well as the Arab League as a whole, have a very clear line with regard to the response to the use of chemical weapons and the need for unconditional participation in Geneva II for a definitive political solution in Syria.”

“In Vilnius, the U.S. Secretary of State briefed his European colleagues in depth on the Middle East peace process. Despite the fact that the major issue is Syria, and Egypt is major current issue in the Arab view, as expressed by the Arab League, the big issue is always the conflict in the Middle East, the Israel-Palestinian relationship and the peace process, which we support and we want to see produce a plan for a two-state solution.”

“On Monday, the 55th round of exploratory talks took place between Turkey and Greece – talks that started in 2002 – on issues concerning maritime zones in the Aegean. Our positions are clear. We are discussing – and I want to make this absolutely clear before the Committee – the Aegean and the Eastern Mediterranean, we are discussing the continental shelf and exclusive economic zone. That is, all the maritime zones, as provided for by the International Law of the Sea. This is something that should have always been clear, but now it is absolutely clear, and I think it is very important and I stress it in particular. The meeting took place between the Secretary General of the Turkish Foreign Ministry, Mr. Sinirlioğlu, and Ambassador Apostolidis, who is the head of the Greek delegation on these issues.”