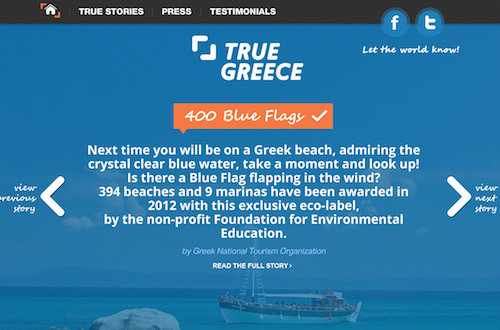 The Greek National Tourism Organisation (GNTO), in its framework of initiatives to change the current climate that is impacting the country’s tourism industry in the international travel market, has introduced a new tool designed to help reverse the downward trend. GNTO, in cooperation with the interim government, representatives of the Greek Ministry of Culture and Tourism, representatives of the travel industry, and other officials, set forth to integrate a new web-based platform into the existing current promotional campaign.

The Internet-based initiative aims to further promote the positive publicity of Greece as a tourist destination on the Internet utilizing social media. On this basis, it was considered necessary to develop an online reputation management mechanism and brand monitoring mechanism to oversee and manage the comments, opinions and observations made about Greece as a tourist destination.

The initiatives’ key priorities are: a. The promotion and communication of key elements and competitive advantages of the Greek tourism product; b. The promotion and dissemination (through social media) of positive messages/opinions that visitors have about their experiences (via video spots, web testimonials, reviews, posts, tweets).

The aforementioned will focus on three key subject areas: 1. Business as usual; 2. Value For Money/Affordability; 3. Safety.

The initiative is already being supported by a series of government agencies including Greek Radio Television S.A, Athens News Agency and the Hellenic Foreign Ministry. The agencies will be assisting the effort by tracking and gathering news and other related material as well as working with local, national and international media outlets.