Posted on: April 19th, 2013 by Dimitris Ioannou No Comments 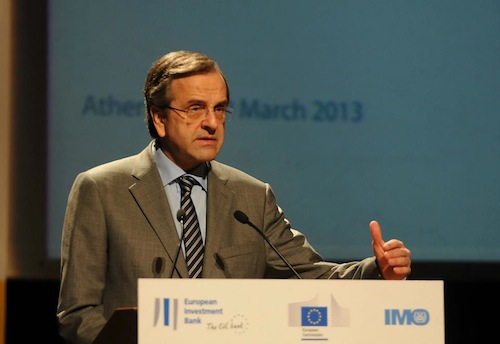 Prime Minister Antonis Samaras, in his address yesterday at the 12th conference of the Euro-Med Cooperation and Investments Mechanism, has sent a message to Europe that, with its stance, it can contribute to the efforts being made for speedy and safe completion of the procedures for declaring Exclusive Economic Zones (EEZ) not only by Greece but also by the other Mediterranean countries of Europe, AMNA reports.

Samaras noted that the energy reserves in the wider region were under the jurisdiction mainly of European member countries. ” This is part of our European wealth, which we must exploit — the declaration of the EEZ is in the jurisdiction of the states, but the EU can back these states so that everything can be completed safely,” he said, adding that “we must rally together for something that unites us, we must raise our head for something that gives us prospect,” Samaras said, according to the state agency, emphasizing that Greece is at the most neuralgic point of the Mediterranean.

“Europe must make its presence felt in its neighbourhood. The Mediterranean plays and will play a decisive role for the security and international radiance of Europe, for its energy supply,” he added.

According to Kathimerini, adlthough Samaras did not refer to Cyprus specifically, it was clear that his message was designed to underline Greece’s expectation that the EU should back Athens in any dispute that might emerge with Turkey over the delineation of the Greek continental shelf and future oil and gas drilling rights. Samaras also suggested for the first time that Greece, Malta and Cyprus could cooperate to maximize the potential for hydrocarbon discoveries. “Look at the map and see what great possibilities this creates for Europe,” he said.