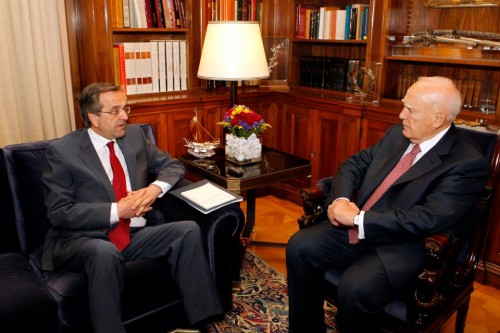 Prime Minister Antonis Samaras will be having talks with coalition party leaders Evangelos Venizelos and Fotis Kouvelis tomorrow, after his briefing with the President Karolos Papoulias at noon today. Samaras will give his coalition partners feedback from his meetings in Berlin and Paris and discuss the 11.5 billion euros austerity package demanded by the troika, expected to be finalized by mid-September.

Yesterday, Finance Minister Yannis Stournaras met with cabinet colleagues to discuss cuts in special payrolls in civil service, with uniform employees to remain the big issue. Media report proposals to foresee reductions of 6% for armed forces employees and of 20% for judicial employees.

A European spokesman indicated that a much-awaited report on Greece’s economic reform progress would probably be ready in early October, according to Kathimerini. “The troika will return to Athens in early September to begin the concluding phase of the first review of the second program for Greece,” Simon O’Connor, spokesman for European Monetary and Economic Affairs Commissioner Olli Rehn, told reporters, adding that the envoys’ mission was expected to “take several weeks.” According to a report in Germany’s Rheinische Post, the report will be out in “early October” due to delays in moving forward with privatizations.

Meanwhile, the Prime Minister sent out a message of optimism at the Acropolis Museum, during a brief speech on the presentation of the historic silver cup awarded to Spyros Louis in the first modern Olympic Games in 1896. “Today, Greece takes part in a whole new marathon. It is an event, which tests the strength, the will and the athlete. This contest can be won through the heart and the mind,” said Antonis Samaras. “So we will win this marathon,” he said, expressing optimism that Greece will overcome all obstacles.