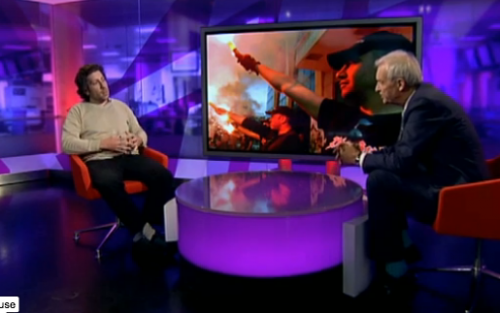 A prosecutor on Wednesday ordered an investigation into a documentary aired on Britain’s Channel 4 showing a parliamentary candidate for the neofascist Golden Dawn calling for immigrants to be made into soap and lamps.

“We are ready to open the ovens. We will turn them into soap … to wash cars and pavements. We will make lamps from their skin ,” Alexandros Plomaritis, 44, a deputy candidate in Greece’s parliamentary elections last summer, is heard saying in the film.

The film titled “The Cleaners” was shot with the full knowledge of the members, according to Channel 4, although a statement from Golden Dawn claims the members were unaware that they were being filmed.

The documentary, can be viewed on the Channel 4 News website, but comes with a warning that it contains highly offensive and racist language.

Golden Dawn spokesman Ilias Kasidiaris described the video as “tragicomic” and the opinions expressed as “laughable.”

In a related development, Golden Dawn MPs have told supporters of the far right party that it will create privately-run nursery schools for Greek children.

Speaking at an event in Crete last week, lawmakers Ilias Panagiotaros and Ilias Lagos, announced the party’s intention to open its own nursery schools.

The extremist party’s deputies launched an attack on the Greek left, claiming it had caused children to learn a warped version of the country’s history.

Since then support for the party has doubled as it pushes tough new anti-immigrant laws, including banning non-ethnic Greeks from the military and police.