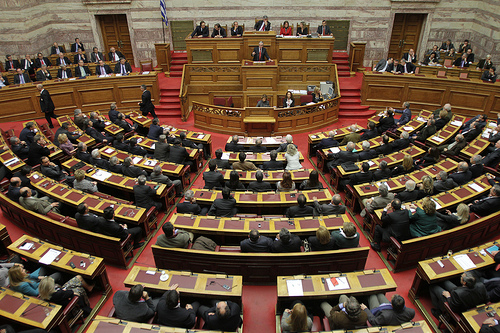 “They are not asking for agreement, they are asking us to be their partners in crime; we will not be their accomplices…” said SYRIZA leader Alexis Tsipras, who decided not to attend Monday’s second round of political leaders’ meeting under President Papoulias. A bit earlier he had urged the three leaders of ND, PASOK and Democratic Left to form a government and make use of their 168 majority MPs.

This is an argument Alexis voiced with the easiness of someone who is planning to keep a distance from any government scheme that would assume the responsibility to manage the agreements Greece has signed with its lenders. SYRIZA’s alternatives are alien to this approach. Party cadres have already talked about economic measures that sound not only obsolete but also irrational.

SYRIZA leader knows his crew cannot serve the needs of the country in its fifth year of recession. The 38-year old politician chooses to ride the wave of the punishment vote, trying to sustain dissatisfied voters that jumped the fence from PASOK, or travelled a really long way from ND to join the ranks of the European Left; 37% and 13% of the SYRIZA vote respectively. Yesterday he announced the ‘rebirth’ of SYRIZA into a new ‘democratic left coalition’, in a move that reminded of Andreas Papandreou in the beginning of the 1980s.

On the other hand, ND and PASOK are trying to delegate responsibility, since they are fully aware that although torched by the cruelty of voters, the latter seem to want them to stay in charge and, at the same time, start improving fast in order to fit the likes and dislikes of citizens. These days, more than 70% of Greek voters appear supportive of the country’s staying in the Eurozone; at the same time, a great majority has voted for parties that preach against this target. This oxymoron clearly makes things easier for pro-European parties, as Greece will approach decision time over the next ballot poll.

However, do we really need a re-election? Does Greece really need another month of uncertainty just to rearrange scores of MPs amongst political parties? Obviously the May 6 mandate by Greek voters to the political system as a whole was to cooperate, hence the simplicity of the solution: Greek pro-Europe politicians should decide to put the country first and form a government with a clear mandate for the next 2-year period; also give a promise that no election will be held before this deadline.

Will they be just ND-PASOK-DIMAR, or more centre-right forces (Drasi, Democratic Alliance) could come to the rescue, offering new blood and fresh ideas to govern the country? Could even some MPs from Independent Greeks declare some short of availability to support the coalition in rough times? This would definitely armor the scheme even more.

These moves require politicians who are willing to fall in the battlefield to save their country. However, if they win, they will be rewarded by people who already expect them to do just that.

But most of all, what Greece really needs, is its politicians to be brave. Admit their mistakes, assume responsibility, set aside partisan interests, clean their backyards and decide to govern, no matter what; fight for fiscal streamlining, structural changes and growth planning; approach the problems in a holistic way that puts people first, employ common sense in public management and ignite the growth engines of the country.

This is the brave thing to do… actually this would be the “Greek thing to do”, to restart the country and inspire Greeks in and out of the country.