Posted on: May 29th, 2013 by Dimitris Ioannou No Comments

Greeks less satisfied with their lives than OECD average 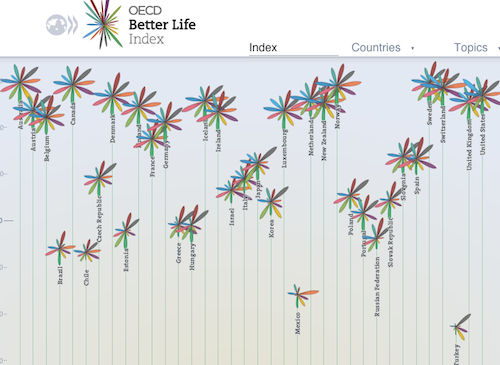 Greece performs moderately well in overall measures of well-being, as shown by the fact that it ranks close to the average in a large number of topics in the Better Life Index.

Money, while it cannot buy happiness, is an important means to achieving higher living standards. In Greece, the average household net-adjusted disposable income is 20 440 USD a year, slightly less than the OECD average of 23 047 USD a year. But there is a considerable gap between the richest and poorest – the top 20% of the population earn six times as much as the bottom 20%.

In terms of employment, some 56% of people aged 15 to 64 in Greece have a paid job, below the OECD employment average of 66%. Some 66% of men are in paid work, compared with 45% of women, suggesting that women encounter difficulties in balancing family and career. People in Greece work 2 032 hours a year, more than the OECD average of 1 776 hours. Almost 5% of employees work very long hours, lower than the OECD average of 9%, with 6% of men working very long hours compared with 4% for women.

Having a good education is an important requisite for finding a job. In Greece, 65% of adults aged 25-64 have earned the equivalent of a high-school degree, less than the OECD average of 74%. This is equally true of men and women. In terms of the quality of the education system, the average student scored 473 in reading literacy, maths and science in the OECD’s Programme for International Student Assessment (PISA). This score is lower than the OECD average of 497. On average in Greece, girls outperformed boys by 14 points, more than the average OECD gap of 9 points.

Concerning the public sphere, there is a moderate sense of community and moderate levels of civic participation in Greece, where 81% of people believe that they know someone they could rely on in time of need, lower than the OECD average of 90%. Voter turnout, a measure of public trust in government and of citizens’ participation in the political process, was 62% during recent elections, below the OECD average of 72%.

In general, Greeks are less satisfied with their lives than the OECD average, with 71% of people saying they have more positive experiences in an average day (feelings of rest, pride in accomplishment, enjoyment, etc) than negative ones (pain, worry, sadness, boredom, etc). This figure is lower than the OECD average of 80%.