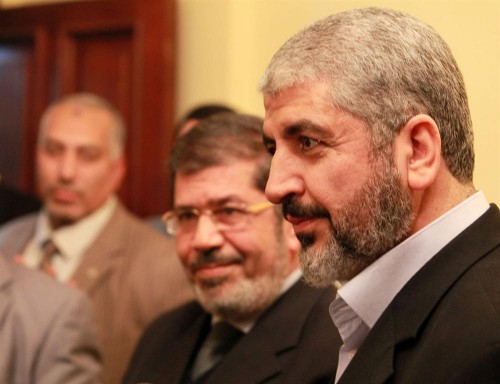 Hamas leader Khaled Meshaal said on Sunday that the case of a mass hunger strike by Palestinian prisoners in Israeli jails is to be referred to the United Nations General Assembly, according to AFP.

Khaled Meshaal told journalists in Cairo that he had the same opinion with Palestinian president Mahmoud Abbas and with Arab League chief Nabeel Al Arabi over the hunger stike issue and were in  ”full coordination.”

Al-Arabi has denounced Israeli detention policies as being inhumane and in violation of human rights.

Approximately 1,200 Palestinian prisoners began an open hunger strike on 17 April, with the campaign gaining further momentum over this past week and additional prisoners joining daily, according to Addameer support and human rights association.

Addameer estimates that the current number of prisoners engaged in open hunger strike is around 2,000. This number includes the 19 prisoners currently held in isolation for “security reasons.” Ahmad Sa’adat, the imprisoned Secretary General of the Popular Front for the Liberation of Palestine (PFLP), who has been held in isolation for over three years, reported on 23 April that since the beginning of his hunger strike on 17 April, he had already lost 6 kg.

According to Palestinian Central Bureau of Statistics and prisoner advocacy groups, there are currently over 6,000 Palestinian prisoners, including legislators, in Israeli jails, many of whom have been rounded up without charge or trial.

Palestinian sources reported, Sunday, that detained secretary-general of the Popular Front for the Liberation of Palestine (PFLP), Ahmad Sa’adat, was moved to the Ramla prison hospital after the deterioration of his health condition.

The Quds Net News Agency reported that detainees of the PFLP rejected an Israeli offer to end their hunger-strike in exchange for removing Sa’adat from solitary confinement, and stated that Israel must stop all of its violations, and put an end to its illegal solitary confinement policies.