Hollande: Greece has to stick to its bailout commitments 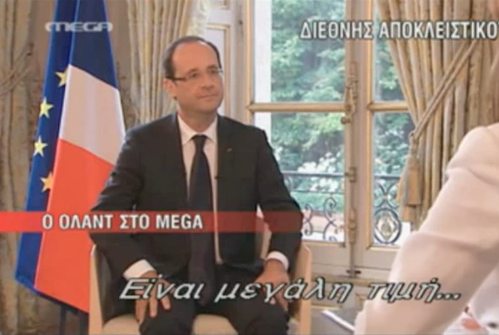 French President Francois Hollande in an interview with Mega TV warned Greeks yesterday that some Eurozone countries are prepared to let Greece return to the drachma if it shows a lack of willingness to meet its bailout commitments after the June 17 election.

“There will be countries in the eurozone that would prefer to see an end to Greece’s presence in the eurozone if there is an impression that the Greeks want to distance themselves from the agreed commitments,” he added.

Hollande pledged that at an EU leaders’ summit later this month would argue for the use of European structural funds to help it return to growth. He said Greek voters would decide what they wanted.“We will adopt growth measures that will have an impact on Greece if it chooses to remain in the eurozone and meet its commitments.”

He said Greeks could be sure that if they decided to remain in the euro, they would be helped by their international partners.

Greece will hold its second parliamentary election on June 17, after a May vote failed to produce any workable majority. The leftist Syriza party, which has vowed to tear up the bailout deal, has a good chance of winning, and even parties which backed the rescue now favor renegotiating its terms.

EU leaders are growing international pressure to take bold action when they hold a summit on June 28 and 29 as the eurozone crisis increasingly threatens global growth prospects.