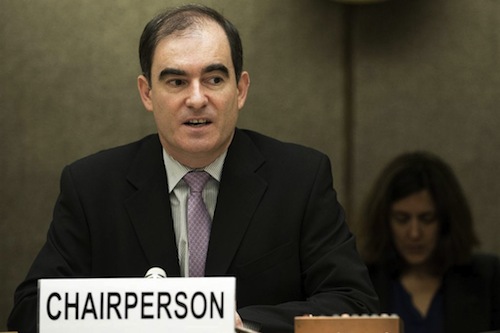 The humanitarian response for Syria is facing a critical shortage of funds, a top United Nations relief official warned yesterday, calling on the donor community to scale up their contributions to enable aid agencies to help those affected by the escalating crisis.

“If we don’t get more money, people will die and there will be more humanitarian suffering. The needs will continue to grow as long as this conflict continues – that is a sad and tragic truth,” said John Ging, the Director of the Coordination and Response Division of the UN Office for the Coordination of Humanitarian Affairs (OCHA).

“To enable humanitarian action in an incredibly difficult, dangerous environment, funding is now the number one priority in terms of unlocking a bigger humanitarian response. That’s both for inside Syria and also for the regional refugee response,” Ging told reporters in Geneva following the fourth meeting of the Syrian Humanitarian Forum.

The forum brought together over 350 participants from Member States, regional organizations, international non-governmental organizations (NGOs) and UN humanitarian agencies to mobilize the necessary resources to provide assistance to the hundreds of thousands of people uprooted by the conflict, which began last year as an uprising against President Bashar Al-Assad.

“We came together today in the face of an escalating conflict, which is having the predictable devastating humanitarian and human impact,” said Mr. Ging, who added that insecurity remains a major obstacle to the full implementation of the humanitarian response plan.

He noted that there has been a “significant” scale-up of assistance over the last month, from 500,000 people provided with food assistance last month to an expected 850,000 people this month’ but despite the increase, the situation is deteriorating. “In spite of the scale-up, the gap between the needs and the means is very much still there,” he said.

Ging appealed to the donor community to scale up their donations, stating that 20 per cent funding for both appeals is insufficient.

“We have to be prepared, sadly, for a bigger demand on us collectively as this conflict continues. And we must be motivated by the plight of the Syrian people,” he said. “We cannot become numb to their suffering.”

In a statement issued yesterday, the Acting Special Representative of the Secretary-General on Sexual Violence in Conflict, Vijay Nambiar, also highlighted the ongoing suffering of the Syrian people, describing recent reports of sexual violence against women, children and men by Government forces and the armed militias known as the Shabiha, as “alarming.”

He said that the prevailing atmosphere in Syria has enabled perpetrators to commit serious human rights violations, including sexual violence, with impunity. He also stressed the need for these crimes must be fully and independently investigated, and urged the Security Council to use all its tools, including possible referrals to the International Criminal Court (ICC).

“A strong signal must go to perpetrators of sexual violence that they will be held accountable for these crimes,” he stated.

Meanwhile, on the political front, the Joint Special Envoy for the UN and the League of Arab States for the Syrian Crisis, Kofi Annan, arrived in Moscow today for two days of talks with Russian President Vladimir Putin and Foreign Minister Sergey Lavrov.

Annan has repeatedly called on the parties to abide by the six-point peace plan he presented several months ago to end the crisis. The plan calls for an end to violence, access for humanitarian agencies to provide relief to those in need, the release of detainees, the start of inclusive political dialogue, and unrestricted access to the country for the international media.