I know what it means to look a child in the eye and say, ‘If they come for me, you need to run’ 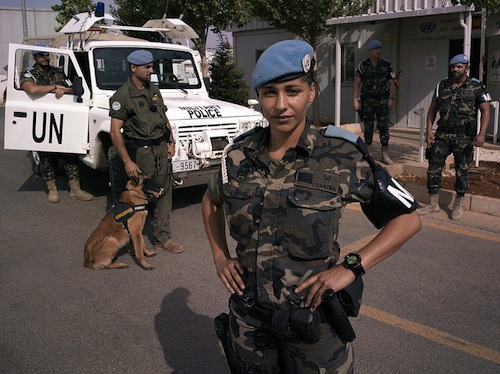 These words came from Zainab Hawa Bangura, former health minister of Sierra Leone and a survivor of that country’s civil war, who has just completed six months in office and is determined to get governments to take the lead in combatting rape and sexual violence in their territories.

It is estimated that up to seven in ten women globally will be beaten, raped, abused, or mutilated in their lifetimes. Violence against women is universal, and is prevalent in all countries and all settings. A gross human rights violation, it fractures families and communities and hampers development.

Against this backdrop, the Commission on the Status of Women is focusing its current session (4-15 March) at UN Headquarters in New York on the theme “Elimination and prevention of all forms of violence against women and girls.” The session is being billed as the largest international meeting on ending violence against women.

Among those on the front lines of battling this scourge are the men and women who serve with UN peacekeeping operations in conflict and post-conflict settings. The strong link between women and peace and security was recognized in 2000 when the Security Council adopted resolution 1325 – the first resolution to address the disproportionate and unique impact of armed conflict on women. Through 1325 and subsequent resolutions, peacekeeping missions have been increasingly mandated to address violence against women, particularly sexual violence.

While host governments are ultimately responsible for the protection of their civilian population, UN peacekeepers are playing an increasing role in helping to tackle violence against women, thanks to specific mandates to address the problem, tailored training and a growing cadre of female peacekeepers who bring their unique skills.

“Preventing violence against women is important because this violence undermines key elements of successful post-conflict peacebuilding, such as social stability, economic recovery, effective State authority, and overall development,” the Executive Director of the UN Entity for Gender Equality and the Empowerment of Women (UN Women), Michelle Bachelet, told the Commission as it began its session.

The Department of Peacekeeping Operations (DPKO) works closely with a number of partners within the UN family to carry out this mandate, having learned lessons from experiences over the years in places such as Bosnia, Rwanda and the Democratic Republic of the Congo (DRC).

On the ground, peacekeepers carry out a range of activities to both protect civilians directly, as well as help strengthen frail state institutions such as the national police and judiciary to deal with violence against women. Their efforts range from helping to change discriminatory laws and training national police on responding to gender-based violence to providing ‘safe corridors’ for women to go to market and electricity in some villages so women can move around without fear of being assaulted when it is dark.

In Haiti, the UN Police (UNPOL) helped to implement protection measures in the camps for those displaced by the 2010 earthquake, and has a Sexual and Gender-based Violence (SGBV) Team that supports the Haitian National Police. A gender curriculum for national police cadets, and training on SGBV for police investigators have also been developed.

The UN missions in Liberia, Côte d’Ivoire and DRC are also working to enhance the capacity of national security institutions to respond to gender-based violence, including rape. Prior to winding up its presence in Timor-Leste last December, the UN mission there played a vital role in setting up vulnerable persons units – safe places where people could come to report domestic violence – as well as to getting them incorporated into the Criminal Investigation Service.

A major role is played on the ground by Gender Advisers, whose work includes supporting local women to participate in peace processes, protecting women and girls from sexual violence and engaging women’s voices in legal and judicial procedures. Currently there are eight senior gender advisers in peacekeeping operations.

More recently, Women Protection Advisers have started being deployed with a specific mandate to address conflict-related sexual violence, with the first ones already working with the UN mission in South Sudan. DPKO and its partners are also working on an early warning mechanism to stave off attacks before they happen.