Posted on: May 1st, 2012 by AlYunaniya Staff No Comments

Iran to reciprocate over Canada visa closure in Tehran 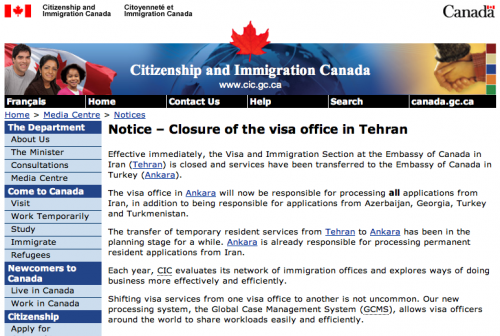 Iran announced on Tuesday it may take take mutual action over a decision by  the Canadian embassy in Tehran to close its visa section “effective immediately” as a cost-cutting measure, according to Zawya, middle east and financial news website.

The decision made by the Citizenship and immigration Canada department, came via a link on its official website that it had closed its visa section as part of an effort to operate “more effectively and efficiently.”

It said that all visa serivces would be transferred to the Canadian embassy in Ankara, in addition to being responsible for applications from Azerbaijan, Georgia, Turkey and Turkmenistan.

The move has outraged many Iranians who had been planning to apply for tourist or immigration visas to Canada, with several expressing their dissatisfaction on Twitter and other social media, according to AFP.

The Iranian community in Canada has started an online  petition urging Minister of Citizenship, Immigration and Multiculturalism, Mr. Jason Kenny to consider the situation and voiced their concerns regarding this decision that  as they stated “will impact the lives of almost every permanent resident or Canadian citizen with ties to Iran.”

Canada has in recent years been seen by many  Iranians as a desirable destination to migrate especially for educational purposes, though restrictions on that matter have recently been applied.

There are approximately 120,000 people of Iranian origin or descent living in Canada according to the  2006 census.

The closure of the Canadian visa office further narrows options for Iranians seeking to travel west, after Britain closed its Tehran embassy in November after Iranian students stormed it. The United States also has no embassy since 1980 after Iranian students attacked it and took 52 Americans hostage for 444 days.