Posted on: October 30th, 2012 by Romana Turina No Comments 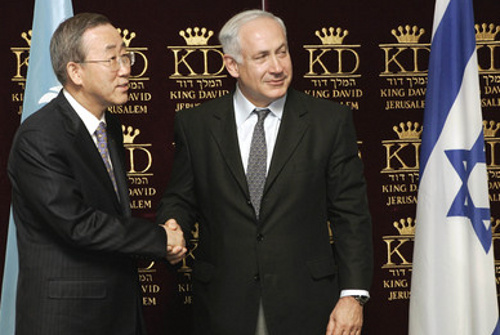 Israel has weathered the global economic crisis, but economic and security challenges remain, and the ultra-nationalist party seems to be the answer to a stronger political management of the country.

“I came here today to ask you to vote for a strong Likud, a strong prime minister, a strong government and a strong Israel,” Netanyahu stated. “I believe that at this time it is crucial that the national camp join forces, and that is the reason why I asked Avigdor Lieberman to run on a joint list with the Likud,” he said.

The move, announced last week, has been criticized by some members of the Likud, who worried that the partnership would bend their party toward the secular right, but Netanyahu was greeted with loud applause as he addressed the gathering.

Avraham Diskin, a Hebrew University political scientist, said to Fox news the move could backfire on Netanyahu by making him appear more as a hard-liner, and alienating some of the Likud’s traditional supporters: “It will definitely be perceived at least as being more right wing than it traditionally has been. Netanyahu this term did his best to be more centrist than hawkish,” he claimed.

Diskin said religious Jewish voters of Middle Eastern background might turn to other alternatives because of Yisrael Beitenu’s reputation as a party dominated by fiercely secular immigrants from the former Soviet Union. Lieberman, himself an immigrant from Moldova, has fought to bring civil marriage to Israel, an idea opposed by the religious establishment.

It is expected that religious voters will turn to smaller, religious parties, while Likud centrists might leave, and join more moderate parties because of Lieberman’s dominant position.

In his speech, Netanyahu promised that Likud would not change its platform and would remain true to its ideals of preserving the Land of Israel’s security.

The event has raised speculation that centrist parties may also band together as a bloc in response to the ultra-nationalist danger;  the TNS/Teleseker poll of 500 people, conducted for the Maariv newspaper, gave the merged party 43 of parliament’s 120 seats. Ultra-Orthodox parties that traditionally align with Likud would win 24, potentially handing Netanyahu a comfortable hard-line majority of 67 seats.