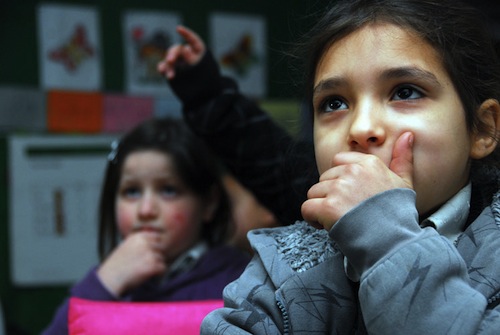 Many Gazan children haven’t been able to see their imprisoned parents since 2007 as Israel restricts children above the age of 8 to visit.

In July 2012, Israel reinstated authorization for relatives to visit Palestinian prisoners and detainees from the Gaza Strip being held in Israel

Such visits were prohibited as of September 2007, shortly after Hamas took control of the Gaza Strip.

The Israeli decision to permit visits was made after some 2,000 Palestinian inmates went on a nearly six-week-long hunger strike. The media reported that the strike ended after representatives of the striking inmates reached an agreement with the Israeli Prison Service (IPS), which included an Israeli pledge to renew permission for family visits to Gazan inmates.

However, Israel set strict criteria for theses visits, allowing only parents, wives and children under eight to visit the inmates. All other relatives, including children over 8, siblings and grandparents, are not allowed to visit. Visitation rights were extended to inmates’ children under the age of eight only in May 2013, and children have taken part in three visits since.

B’Tselem, an Israeli Information Center for Human Rights in the Occupied Territories, has gathered testimonies from Gazan children over the age of eight who have not seen their imprisoned fathers since 2007. In their testimonies, the children describe their longing to be reunited with their fathers as well as the difficulties they face because of the separation. The children’s only mode of communication with their fathers is written correspondence and sending pictures.

Visits are permitted very infrequently, only once a week on Mondays, and then only at one prison facility at a time: Nafha, Ramon and Eshel (Dekel). As a result, each eligible inmate receives a visit once every three or four months. In contrast, inmates from Israel or from the West Bank who are held on criminal or security grounds may receive visits once every two weeks.

At the end of April 2013, some 511 Gazans, including 14 minors, were held in Israeli prisons. Over 411 of the inmates are defined as “security inmates,” including one minor who was arrested in February 2012, B’Tselem reports.  One hundred others, including 13 minors, are defined as “criminal inmates”.

According to figures provided by the Red Cross, Gazan inmates in Israel had 830 visitors from Gaza between July 2012 and 22 April 2013. The number of visitors allowed is not constant, ranging anywhere from about 40 to about 80 on a particular scheduled visiting-day. Some inmates have received no visitors whatsoever for various reasons, including having no relatives in Gaza matching the IPS criteria or an IPS sanction on some inmates.

In advance of every visit, the IPS sends the Red Cross a list of inmates eligible for visits on that particular date and the details of the relatives permitted to come. The Red Cross ensures that the listed relatives are in the Gaza Strip and informs them of the upcoming visit. If a certain inmate’s relatives are unable to attend on the given date, they may join the next visit to that prison. The IPS does not allow relatives of other inmates to take their place.

‘Ali Abu Haneyeh, 13, of a-Nuseirat Refugee Camp in the central Gaza Strip, told B’Tselem field researcher Khaled al-‘Azayzeh how much he misses his father: “Every time I miss him, I open up the photo album and look at old photos. I keep asking my mother if he’s changed and what he looks like now.”

The visit lasts approximately 45 minutes. A glass partition separates the inmate from his visitors, and they communicate via a telephone. The visitors can give the inmates a limited amount of food and drink, but no gifts.

According to B’Tselem: “These restrictions on family visits to Gazan inmates in Israel contravene the Israel’s obligation to enable such visits. This obligation stems from the right of the inmates and of their relatives to family life, which is enshrined in both international and Israeli law. International law not only prohibits arbitrary disruption of family life, but obliges the state to actively ensure its fulfilment.”

“Israel must match visitation rights of Gazan inmates to those from Israel and the West Bank, increasing the frequency of family visits and enabling all inmates to realize their right to such visits once every two weeks, and not just once every three or four months as things now stand. Similarly, Israel must also allow Gazan inmates to receive visits from all first-degree relatives, including children of all ages,” the Israeli center for Human Rights in the Occupied Territories added.